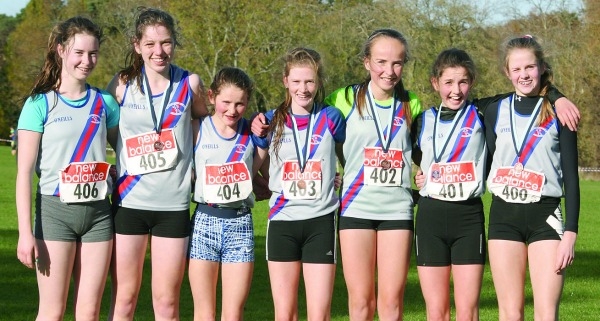 DSD in seventh heaven in Santry

The Senior Ladies were led home by Fiona Clinton in fourth place with Maria McCambridge fifth and Meghan Ryan seventh while the Senior Men’s team finished up third, John Eves the first home for them in sixth, with Patrick MacGabhann following in ninth, Robert Corbally 13th, Killian Mooney 20th and Mark Conway 27th.

First over the line for the Under 13 girls was Saoirse O’Brien in fourth – a great feat considering she was running her first cross-country race for the club.

She was followed home by clubmates Ciara Kelly in seventh, Isabella Tomkin Beddy (moving up an age group) eighth, and Gracie Browne (also stepping up) in ninth.

Under 14 Dublin Champ-ion Morgan Clarkson together with Alex O’Floinn had a great battle in the Under-15 Boys contest in which they finished second and third respectively.

Eimear Maher, moving up from the Under-14 age group, finished third in the Under-15 girls race and with Aimee Kenna, Lily May Craig, Caoimhe

Nic Eachain and Emily Bradshaw packing really well to finish top of the podium with a score of 25.

James Maguire, in only his second appearance since his return from Germany, had a right battle with Schools International champion Louis O’Loughlin, and picked up silver at Under 17 degree.

Joining him on the podium was Aaron Donnelly who stormed home for third, with Naoise Moynihan O’Bradaigh sixth. Brian Maguire, James Lenehan and William Kinsella also helped ensure that DSD took gold in this age group.

McCann finished second to national champion Rose Farrell who broke away heading into the last lap, while Dervan was not too far away in third.

Sadhbh O’Loan and Katie Gossan illustrated how strong the DSD squad is in this age group, by finishing fourth and fifth respectively, as the team cantered home to gold.

Eimear Fitzpatrick was runner-up in the Under 19 Girls division with Niamh Carey third, and well supported by Muireann Neville for another team win in this age group.

Mark Molloy was DSD’s only runner in the U20 age group and finished in third.