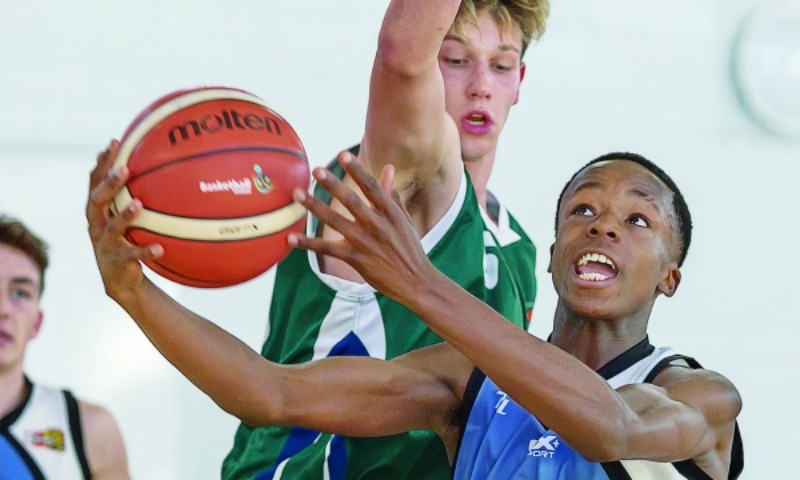 DUBLIN LIONS secured their place in the quarter finals of the Under 18 Men’s National Basketball Cup after a four- match series in Coláiste Bhride last weekend.

The Lions made it to the decider of Pool Four where they lost out by eight to KUBS in a battle for home advantage in the next round.

Still the team will be pleased to have secured further progress after beating Liffey Celtics, Malahide and Ballincollig.
The Lions made the most of the services of 6’11” Forward Aidan Igiehon, who is home for a while from scholarship in the United States.

He emerged top scorer for the team against Liffey with 14 points while Kevin Anyanwa and Sinaly Drame combined for a further 22 to helped them to 48-37 victory.

Renz Valenzuela carded 16 for Liffey, but even his impressive contribution would not really trouble the Clondalkin side.
Against Malahide, Igiehon again led the charge with a 20-point haul while Anyanwa bagged 14 as the Lions surged to a 69 to 61 point triumph.

Neil Kavanagh was the star performer for the side in their 74-67 point victory over Ballincollig with a haul of 22 points while Anyanwa netted 19.

Yet their winning run came to an end against KUBS despite the best efforts of Anyanwa, Kavanagh and Igiehon as they lost 61-53 and, with it, home advantage for the quarter finals.

Elsewhere in Neptune Stadium, Templogue also carded three wins and one defeat in their four Pool One matches.

They blasted off the mark with a 70-36 point demolition of Pyrobel Killester on Saturday morning before recording a 35-point trouncing of Moycullen.

This was followed up with a 77-50 point triumph over Drogheda bullets before their came undone against homeside Neptune 100-85.

On another note, Temple-ogue’s Under 16 players Lauren Darcy and Matthew Harper have made it through the latest selection phase for the Ireland Under 15 squads.

Both panels will be whittled down to 12 players ahead of next year’s FIBA Under 16 European Championships.

Meanwhile the club’s Under 15 players Ellen Ryan and Emma Mullins have been named in the Ireland Under 15 Development squad.