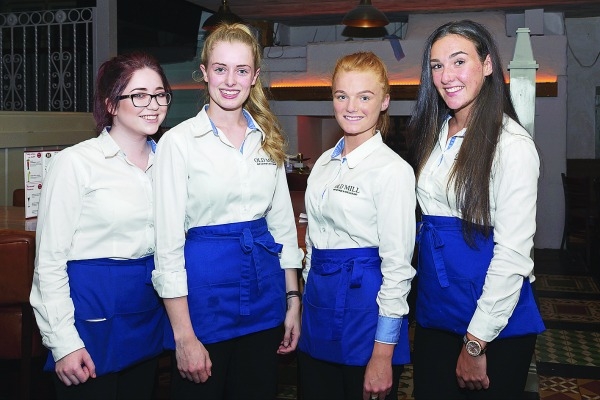 OVER the past 19 years, the Old Mill has secured a solid reputation for quality food and friendly service, a reputation which The Louis Fitzgerald-owned pub hopes to build on with its new-look premises and restaurant.

Sitting on the banks of the Dodder, the Old Mill, which employs more than 60 staff, has been fully refurbished – with the overhaul bringing a modern and brighter twist to the traditional mill-style building.

Since opening on the Old Bawn Road in 1997, the pub has secured a strong, loyal customer base for its food, especially its Sunday carvery – which, despite changes, will remain on the menu due to public demand.

General Manager Brian Redmond told The Echo: “We’ve always been very strong on the food side and after our food section was closed for the past four and a half months we didn’t know how hard it would be to get those customers back.

“However, we’ve had lots of familiar faces back through our doors since the restaurant opened on August 24 – and plenty of new customers too.

“Four of the old carvery staff have remained and there is around 20 new staff between chefs, kitchen porters and waiting staff – most of whom are living locally.”

The new restaurant is called the Charcoal Grill and will offer a carvery and lunch option, including a salad and soup bar, on Monday to Fridays from 12pm to 3pm, with the carvery running all day Sunday from 12pm to 8pm.

From 3pm daily, the bar food menu kicks in and, running until 9pm, boasts Tallaght’s only steak on a stone, alongside other grilled dishes such as ribs, burgers and pulled pork.

Traditional dishes such as stir fries, curries, lasagne and chicken and fish options are also available, alongside a kids menu for €7.

“Like the old layout, people can eat food anywhere in the lounge”, Brian said.

“We’re really happy with the new look of the pub, the refurbishment has freshened up the premises up and given it a new dimension.

“It’s very comfortable and spacious now and great for families or groups with the new boot-style seating and long, high tables perfect for larger groups.

“We’ve also introduced a new cocktail menu and the outdoor cocktail area has been refurbished with astro grass while the Harvest room, for private parties, has doubled in capacity alongside the landing area on the second floor.”

The Mill, which still has live music and a late bar every Saturday and Sunday, is running a special opening offer of a steak on the stone plus chips and sauces for €12.50 every Monday, Tuesday and Wednesday until October 19.