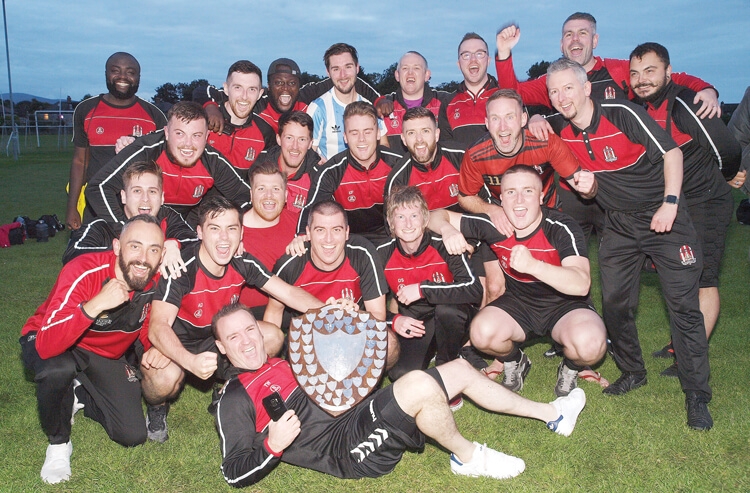 OLDBURY FC signed off on the season with a 4-2 win in a pulsating Division 3A Shield title match against local Tallaght rivals St Maelruans in the VEC, Terenure on Monday night.

This cracking final could have gone either way, considering the amount of chances both sides were presented with on the night.

Oldbury cannot contain their delight at winning the Division 3A Shield

Oldbury got off to the best possible start when Eathan Farrell slotted home a Keith Flynn pass with just two minutes gone on the clock.

That lead was doubled eight minutes later when Terry Ward headed home a Cormac Ryan free kick from the right to put them in command.

The Saints knuckled down after that and proved the slightly the better team for the remainder of the half, but they fluffed at least three good openings before they finally drew level on 25 minutes.

Andy Nowlan was the provider when he played the ball into Anto Harte and, as Oldbury goalkeeper Dylan Farrell advanced, he slipped the ball beyond the netminder’s reach and into the net.

It could have been 3-2 to Oldbury minutes later when Saints keeper Daniel Butler tried one trick too many and Aaron Delaney robbed him of the ball, but luckily Daniel Mahon nipped in to clear the danger.

Such was the pace of the opening half it was hard to believe it would continue after the break, but these two never stopped and on 57 minutes the Saints deservedly drew level.

Nowlan was the scorer after Ciaran Mulligan did the spade work and the goal sent the Maelruan’s faithful wild with delight.

It could have been more as minutes later Nowlan had the ball in the net again, but unfortunately for him he had strayed offside in the approach.

It was always going to be a case of whoever scored next would likely win the tie and it was Oldbury who delivered with 20 minutes remaining, when Robbie Farrell scored from the penalty spot after Delaney was taken down in the area.

That gave them a slight bit of breathing space and as legs began to tire they bagged a fourth after Sean Delaney pounced on a poor Maelruan’s throw-in and delivered the final blow.