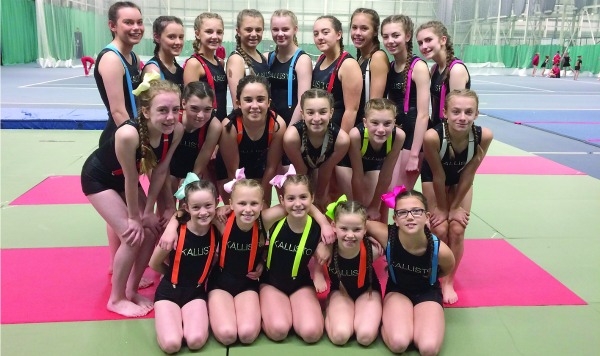 The Senior team ‘Odyssey’ emerged runner-up from their class while the Junior ‘Kallisto’ outfit scooped the ‘Best Newcomer’ award.

Each team is made up of some 20 gymnasts, all of whomperformed superbly under the guidance of coaches Gina McDonagh, Maria Coffey, Caoimhe McCormack and Conor Spain.

“We knew our senior team would do well because they have been away to a lot of other competitions over the past five years in the likes of England, Italy, France, Portugal and Austria,” said McDonagh.

“But this was the first time our junior team have been outside the country and for them to do so well was a massive boost,” she added.

Having last year cele-brated its 50th anniver- sary, Olympian Gymnas-tics Club has enjoyed huge growth over the past two years having set down roots in several areas.

Indeed, with outlets now in Templeogue College, St Colmcille’s CS in Knocklyon, Firhouse and Ballinteer Community Schools, as well as Alexander College, the club now caters for some 2,500 gymnasts.

“The club has expanded a lot over the past two years due to demand,” said McDonagh.

“Instead of concentrating on one full-time gym we decided to open up a number of gyms,” she explained.

In all, the club has some 30 coaches and while they have been running com-petitive display acrobatic teams for the past 12 years, the majority of their members are recreational gymnasts as the club operates under the concept of ‘gymnastics for all’.

That said, more trips to international festivals are planned for the new year, as the junior team looks to continue making their mark in Ireland and the UK, while the senior side will be in European-wide competition.