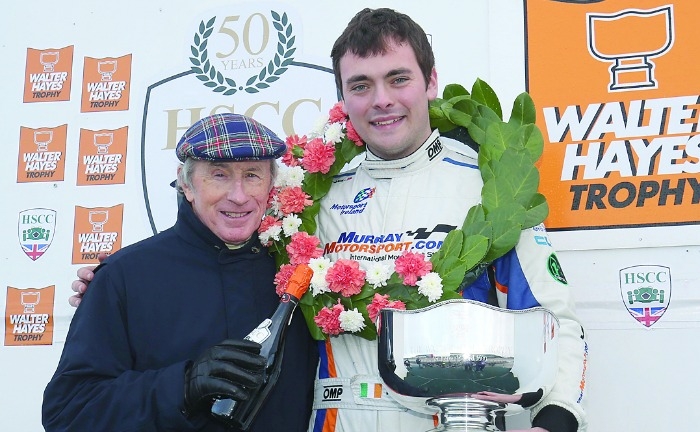 Having previously bagged the Martin Donnelly Trophy and Formula Ford Festival crown, in addition to the British Championship, the Firhouse man was on the brink of the perfect season.

“I always knew this was going to be tough. There were 114 entrants [for the 2016 Walter Hayes Trophy] and it was by far the biggest race I had ever driven in, in terms of numbers.

“We were testing on Thursday and Friday and even then you could see by the lap times the drivers were setting that it was going to be very tough.

“There were about 15 to 20 guys there who were all capable of setting very fast lap times, within three tenths of a second of each other” he pointed out.

The grid for the competition was divided up into six groups, with each one contesting a qualifier and a heat in which Murray made a strong start to take the lead ahead of former winner Wayne Boyd and the experienced Josh Fisher.

But after his gear-lever broke, Murray was soon overtaken by Boyd and struggled to hang on to second place as he lost third gear.

Yet being able to find second and fourth, he closed the gap on the leader and set the fastest lap, although he still had to settle for second.

It was enough to see him qualify on the second row for one of two semi-finals in which he again made a great start to take the lead by the second corner after which he held on for the win and, with it, pole position for the grand final.

“I knew I had the pace in the dry to win it, but then the heavens opened and it lashed rain,” said Murray.

“I don’t mind saying, I was fairly nervous because I hadn’t really driven in the wet all season and my Van Diemen was lining up alongside a Ray which are known to do well in the wet,” he explained.

Still he got off the line very quickly, leaving closest rival Oliver Askew from the US in his wake.

And he continued to pull away, building up a lead of more than eight seconds after the American went off track.

“The conditions were so bad I couldn’t even see that he [Askew] had gone off, so I just kept driving intensely, perhaps too intensely,” said Murray.

“I didn’t want to be getting into the rhythm of counting down the laps, because when you have such a lead you can be tempted to ease off and lose concentration and you can make a mistake.

“I couldn’t believe it when I had won it. It was absolutely amazing. To win the Championship, Martin Donnelly Trophy and Formula Ford Festival, and now this, it was just unbelievable,” he said.

Murray will now be turning his attention to the Mazda Road to Indy Scholarship Shootout in the US next month, having already turned some heads that side of the Atlantic with his performances this year.