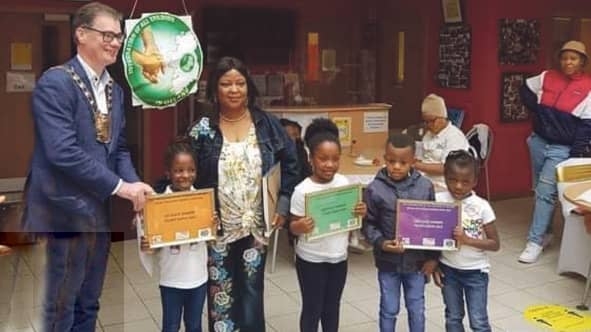 THE Jobstown-based annual Social Inclusion Summer Camp was held entirely online this year, and the end of this year’s camp was marked with an in-person talent and awards show in Citywise Education earlier this month.

The three-week-long camp is the brainchild of Jobstown woman Yemi Ojo, who moved to Ireland from Nigeria 20 years ago.

The mother-of-three decided to set up the camp 16 years ago with her husband Elder Tius Ojo, in a bid to offer an affordable alternative to mainstream summer camps, and to promote social inclusion in the area.

Yemi realised she’d have to reorganise how the summer camp was delivered this year after the lockdown measures were implemented.

The Jobstown woman started hosting Facebook live activities with the children every weekday during the course of the summer camp, where it was €5 per child per week, and she would send messages to the parents in advance of activities so they knew what items would be needed.

“It’s an experience I’ve never had before, and some people thought it couldn’t be done,” Yemi told The Echo.

“We had 50 children who took part, and there were participants from places like America and Nigeria.”

Winner of ‘Baby of the Camp’ Dominion Omorogkomgouan

Camp participants from abroad were also present at the event via a livestream on Zoom.

“The parents were very, very happy with how the camp went,” added Yemi. “I felt that it was wonderful to help the children have a little routine, and a lot of the parents said their children were waiting for me on Facebook before the video even started at 1pm.”

Having successfully navigated her popular summer camp through the ‘new normal’ that has been created as a result of the pandemic, Yemi is optimistic about how the camp will go next year, and added that she wanted to thank the volunteers and Tusla, who helped to make the camp such a success.

“Now that we know that we’re able to do an online camp, and that it was successful,” she said, “the sky’s the limit.

Family of the Year – the winners were the Abidemi Adeniyi family

“We’re looking forward to a great summer next year, and whatever comes, we’ll go with it.”