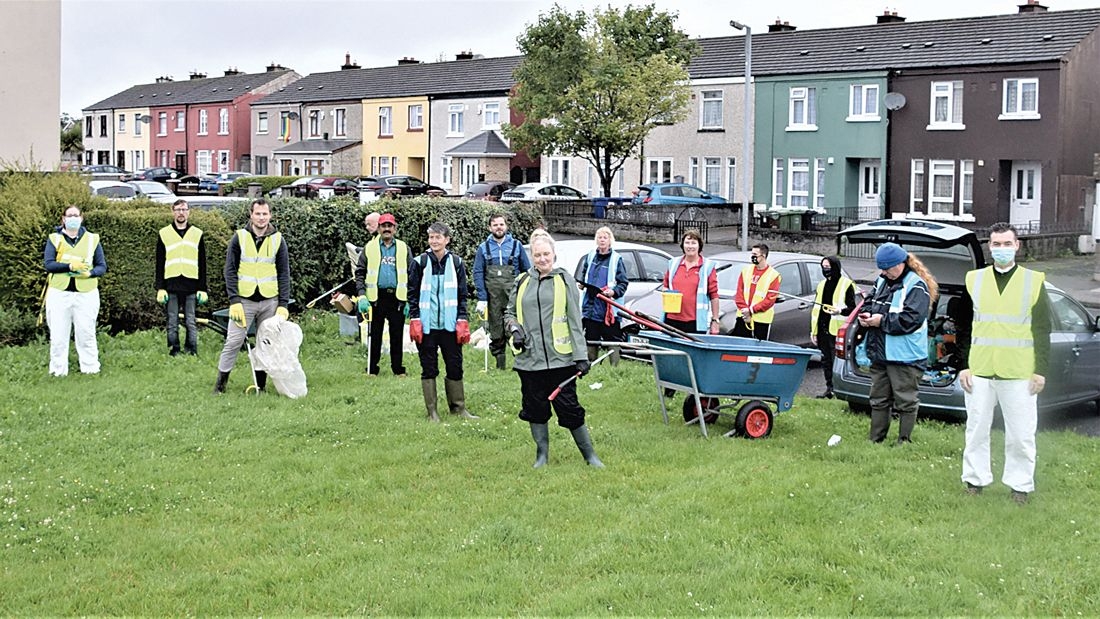 OVER 60 bags of domestic waste were collected by volunteers last weekend during a clean-up of the Jobstown Stream, with one of the organisers describing the greenspace around the stream as a “neglected no-man’s land”.

Environmental group Dodder Action carried out the clean-up last Saturday, where a team of 21 volunteers, including local politicians Alan Edge, Baby Pereppadan and Sandra Fay, were assembled to clean the stream and the surrounding green space.

Some of the volunteers at the clean-up at Jobstown Stream

In the course of cleaning the 750-metre stretch of the stream, the volunteers collected 63 bags of domestic waste, three televisions, baby chairs, a double bed, a car bonnet, three bikes and two wheelie bins.

The remainders of four separate piles of litter that had been set alight were also removed by the group.

Wladek Gaj from Dodder Action told The Echo: “The greenspace around the stream is like a neglected no-man’s land where people dump their stuff. It’s upsetting.

“The amount of rubbish we removed was significant. It’s a culture [of dumping waste in and beside the stream] that’s built up, but it’s a minority that’s doing it.”

Some of the volunteers cleaning up the stream

“I went back up there, only three days after the clean-up, and there was already a pile of burnt rubbish, and the ground was still warm from a burnt-out car that had been taken away by the council that morning.”

Not ones to be deterred, the Dodder Action group plans to return to the Jobstown Stream again in the near future, as they feel that it’s important for areas to be kept clean, and they hope it may encourage some people to change their ways.

“We need to empower the residents to take possession of their greenspaces,” explained Mr Gaj, “but I think some people do feel intimidated by the people who are doing the dumping.

Bags of rubbish they collected

“The psychology of litter and waste is that litter attracts litter, so we hope that if we keep cleaning the area then it will start to be cleaned regularly and people will take pride in their area.”

Local environmentalists from the Litter Mugs will be undertaking a clean-up in Sean Walsh Park this weekend, on Saturday, July 25, at 10.30am and all are welcome to take part.