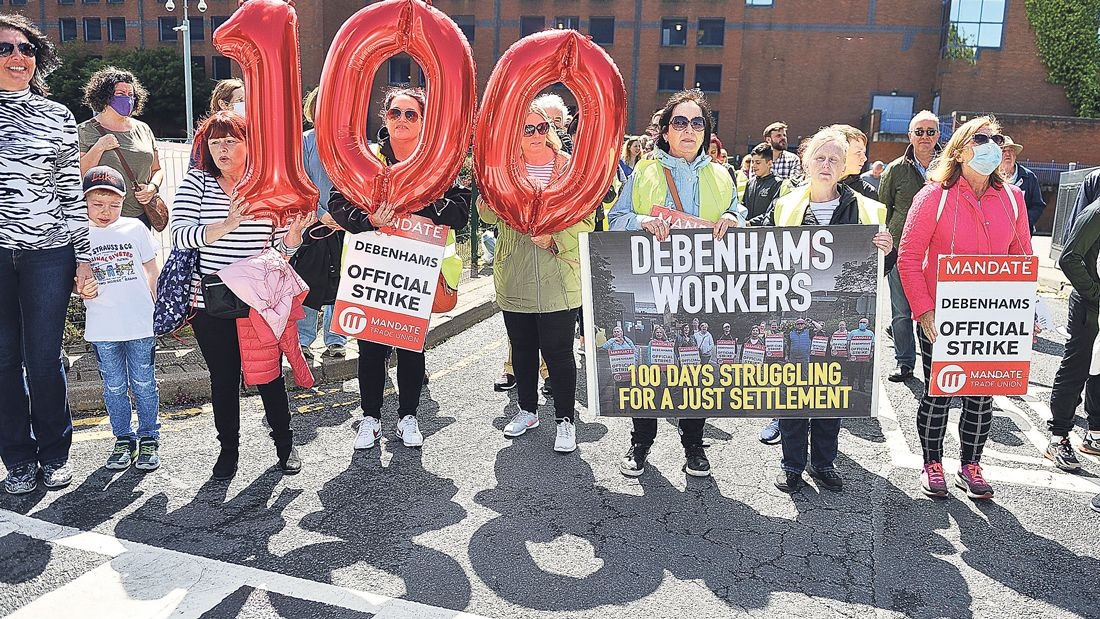 FORMER staff at Debenhams held a major picket on Saturday (July 18), to mark 100 days of fighting for a “fair redundancy”.

They plan to continue a campaign to secure four weeks pay per year of service, as opposed to the basic two week statutory minimum currently on offer, which would add €13 million to the cost of redundancy.

Ever since they were let go on April 9, staff have held intermittent protests at The Square and at other Debenhams stores in Ireland.

Last week, they stepped up the pickets 24/7 in the carpark at the delivery entrance to the shopping centre, in an effort to prevent stock from the store being removed to the UK.

Workers believe the stock in Irish stores – valued at €19m-€20m by liquidators KPMG – should be going into the Irish pot and not moved back to the UK.

There is anger among Irish workers that debt from the UK company is being loaded onto the Irish arm of the operation.

The company is still operating in the UK, and online, with Irish staff instrumental in helping to generate the online business over the last year.

Some 100 former staff at Debenhams in Tallaght, face an uphill battle for a “decent redundancy package”.

Over 100 people protested on Saturday

Last week, liquidator of Debenhams Irish operation KPMG ruled out on legal grounds a payout for redundancy entitlements for workers, and there is little in the way of support from the Irish government.

KPMG have also said the blockade is “preventing the retrieval of the assets” and “slowing down the liquidation process”.

At the picket last week, with passing cars beeping horns in support of the picket, former staff members were in unrepentant mood.

“They don’t have any concern about us, we just want a decent redundancy, they think we are going to put up and go, but we are not,” said former Debenhams worker Anna Gahan.

Carol Quinn, former shop steward at Debenhams Tallaght, said they have been receiving great support from the community.

Ms Quinn said: “It is mostly Dunnes drivers coming in, but all the drivers have been lovely, and we are getting food and pizza dropped off by people.

“Saturday will be 100 days that we have been sacked. We are hoping the government put us in that pot of €20m that Debenhams owes to the taxman.”

Cllr Kieran Mahon (Sol), who has been supporting the picket throughout, says immediate government action is needed to support the workers.

“There is a glut of jobs (lost or at risk) in The Square. With Debenhams and Inglot closing there are questions over other stores – the government need an action plan.

“The State should pursue Debenhams for fraud. Why should the workers be so far down the pecking order.”

Cllr Mahon said blockade pressure could lead to industrial action, and urged the government to implement the recommendations of the Duffy-Cahill report – protection in law for employees.

“We were 100 per cent dissatisfied with the meeting – a lot of questions went unanswered,” said Deputy Smith.

“This has put a lot of pressure on workers, the majority of whom are women aged 50+, who have nothing else to fight for but their rights.”

One of the unanswered questions, was why Debenham’s Danish subsidiary Magasin Du Nord was released from being a co-guarantor in January.

Following an earlier meeting with KPMG in May, Socialist TD Mick Barry demanded Debenhams Retail Ireland Ltd (DRI) be released as co-guarantor of the UK parents £200m loan to itself.