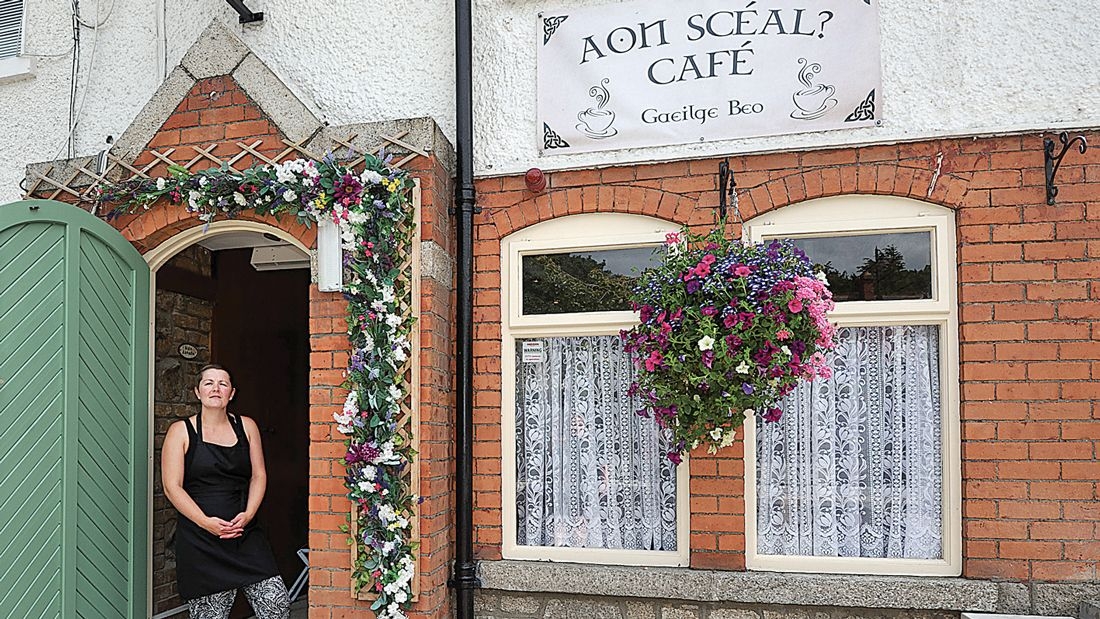 Cafe appealing for two stolen hanging baskets to be replaced

THE manager of a Tallaght Village-based Irish-language café, called Café Aon Scéal, is appealing to people to keep an eye out for two large hanging baskets filled with flowers, which were stolen from the front of the café over the weekend.

The two hanging baskets, which cost €80 each, were stolen last Sunday night and the culprits were caught on CCTV. The café’s manager, Dawn McKeever, is appealing for the flowers to be returned.

The flowers were put up just before the café reopened, after having to close its doors as a result of the lockdown in March, which occurred almost four months after the café first opened in December.

“I put the hanging baskets in front of the building to make the café more noticeable,” explained Ms McKeever, “and we also had a trellis to brighten up the place.

“The hanging baskets were stolen on Sunday evening. We looked back at our CCTV, and we saw the guy who took them and he handed them down to a woman who was standing behind him.

“Those hanging baskets were meant to last us from May to October, and we cable-tied them so they would be secure – or at least I thought they would be.

“They also tried to reef the trellis off, but they didn’t manage to.”

The café had a total of three hanging baskets, however Ms McKeever believes that the thieves didn’t take the third basket because of how heavy they are.

“They could’ve left here with the hanging baskets and dumped them somewhere, or the baskets could be hanging in some unsuspecting person’s garden,” she said.

As a result of the theft, Ms McKeever doesn’t leave the remaining hanging basket outside the café anymore, and it’s instead placed on a table within the café.

Tymon resident Dáithí Mac Gabhann, who is a regular patron of the café, told The Echo: “I was raging when I found out the hanging baskets had been stolen.

“Café Aon Scéal is only a small café, and they were still trying to build up their customer base and then they had to close [because of the lockdown].

“I am so disappointed that someone would do this.”

The café only reopened earlier this month, as some lockdown measures began to be lifted, and the theft has delivered a blow to the café, which is still trying to navigate the ‘new normal’ that we’re all adjusting to.

“It’s a very difficult time for businesses who are just coming back,” explained Ms McKeever. “We put up the hanging baskets just to try and improve the place and make it nicer.

“I don’t think anyone else would get as much benefit out of them as we did. But I don’t know if it would even be worth our while trying to replace them.”

Anyone with information about the theft or the current location of the stolen hanging baskets can contact the café via Facebook, at Café Aon Scéal, or by phone on 085 277 2873.

The café, which was set up by Gaelphobal Thamhlachta, is located in a former house on Main Street Tallaght, which dates back to 1910, and it offers an outlet for people to practice their Irish language skills, whether they’re gaelgeoirs or they only have a cúpla focal, while enjoying café fare.