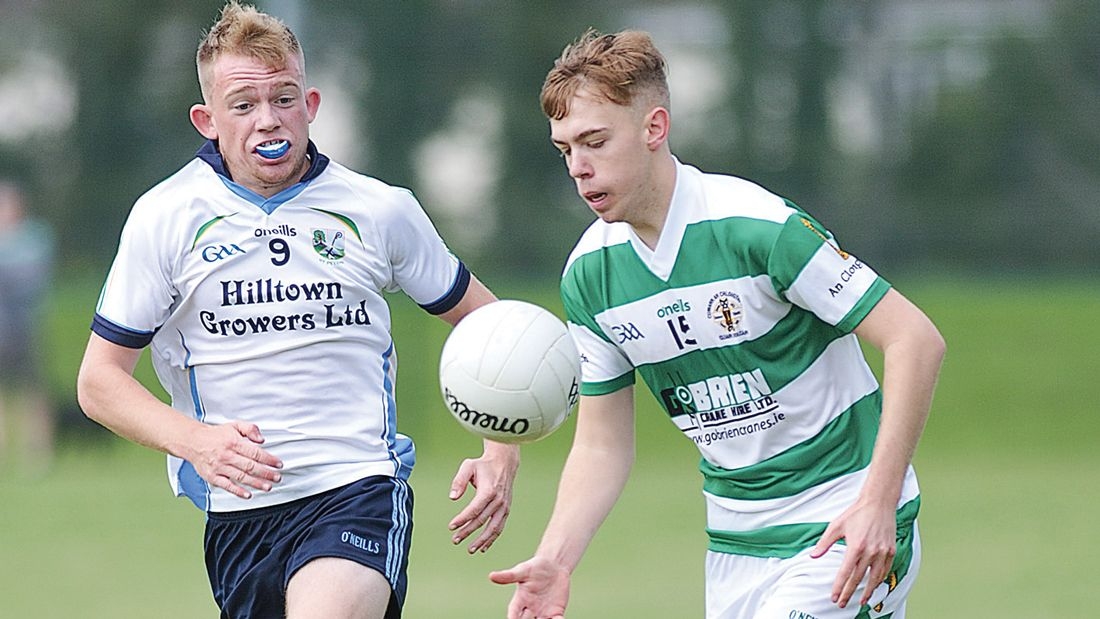 Tower minors edged out by St Peter’s in c’ship

Despite producing a late surge, Round Tower Clondalkin suffered a three-point defeat at the hands of St Peter’s in the Dublin Minor ‘B’ Football Championship at Monastery Road last Sunday morning.

In what was their opening game of Group Four, Towers couldn’t make home advantage count against a slick northside outfit.

An underage amalgamation of Clann Mhuire, Garristown and Ballyboughal, St Peter’s were well served on the day by the central attacking axis of Cian Warren and Callum McCoy.

Between them, the influential duo amassed a combined tally of nine points. Towers centre-forward Michael Broderick finished with an impressive haul of 0-7 to his name, but it wasn’t enough to deny Peter’s.

The Clondalkin men will now aim to bounce back when they face St Anne’s at Bohernabreena next Wednesday (July 29).

Eager to lay down a marker in this fixture, the visitors raised a green flag with just 40 seconds gone on the clock. Tommy White’s deceptive effort on the right-wing floated into the back of Stephen Barry’s net at the final moment.

Peter’s built quickly on this deadlock-breaking strike as both Warren and McCoy found the target in clinical fashion. Already five points adrift, Towers needed something to help them settle into the contest.

Their first score of the proceedings finally arrived when midfielder Adam Byrne clipped a fine point. Conor Morrow was narrowly off-target from an earlier move, but he turned provider for Lee Proctor’s palmed goal on nine minutes.

The Clondalkin faithful were hoping this would give Towers a new lease of life. Instead, it was Peter’s who remained on top for the rest of the opening period. McCoy (’45’) and Marc O’Connell recorded unanswered points to give their side a 1-4 to 1-1 cushion upon the commencement of the first water break.

Peter’s continued to play with great confidence in attack and midfielder Simon Barrett edged them further in front with a 21st-minute point. McCoy subsequently converted another free and Warren bolstered his own individual total with a close-range single.

Towers were struggling to impose themselves on the action, even though much of their build-up play was impressive. Nevertheless, a brace of Broderick frees reduced their deficit to four points (1-7 to 1-3) in time for the interval.

Broderick’s opposite number – Warren – continued to take the game by the scruff of the neck on the restart. At the end of swift team moves in the 31st and 36th minutes, he posted excellent points from play to extend the Peter’s lead.

However, Broderick was also proving to be a reliable source of scores and responded to Warren’s late burst with his third point of the tie. Josh Daniel made a strong impact off the bench and after he was hauled down by a retreating Peter’s defence, corner-forward Ciaran Courtney converted a 35-metre free.

Broderick and McCoy proceeded to trade points before Josh Flynn propelled Peter’s into a 1-11 to 1-6 buffer on the third-quarter mark. Indeed, the Naul-based side looked set for a convincing victory when Warren was picked out in space for his fifth point on 54 minutes.

They held onto their six-point advantage when Oisin Doyle cancelled out a Courtney point in the closing stages of normal time. To Towers’ eternal credit, they never allowed their heads to drop and asked real questions of the Peter’s defence during the dying embers of this encounter.

Broderick pointed after a short free was transferred into his path, while he also added a brace of place-ball scores in stoppage-time. An equalising goal eluded them in the end, but there are plenty of positives for Towers as they push forward into next week’s second round affair with St Anne’s.