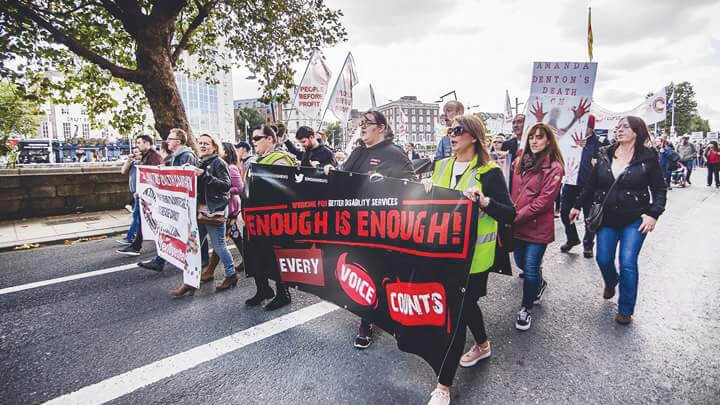 Parents call for equal access to education for their children

THE stories of children with special needs who are unable to start school in September due to a lack of supports are being shared ahead of an upcoming protest - which is calling for equal access to education.

The protest is being organised by Enough is Enough, a parent-led campaign group which, started by families in Tallaght and Clondalkin, has grown into a national movement.

Enough is enough marching at a previous protest.

According to Linda Comerford, spokesperson for Enough is Enough: “When children start school its usually an exciting and proud time for families watching their children start a new chapter in their lives.

“However, for parents of children who require access to special schools and ASD classes, that offer education to children with autism, intellectual disability and other complex needs, the situation for hundreds of parents is that they are left stressed, frustrated and worried because they are unable to access an appropriate schools placement for their children.”

One of the stories shared is seven-year-old, Tallaght resident Sophia’s.

“Hi, my name is Sophia and I will be seven in July, and come September I have no school to go to”, Sophia’s story reads.

“I have been in preschool for five years.

“I’m on my second year in a special autism preschool and will be forced to do another year or get a tutor if something doesn’t change by September.

“Please come and out and help be a voice for those of us who are still finding ours.”

Dylan (14), who also lives in Tallaght, has his name down with a number of schools that have ASD units.

However, his mother told The Echo that he could be waiting at least two years for a place.

“It is totally unacceptable that children with disabilities are required to apply to schools up to 30km away or further, rather than have equal access to local schools that need to be resourced to meet their needs”, spokesperson Ms Comerford said.

“We need to lift these barriers to create real equality for all.”

The protest will take place on April 30 between 11am and 1pm.

For further details visit the Enough is Enough – Every Voice Counts Facebook page.