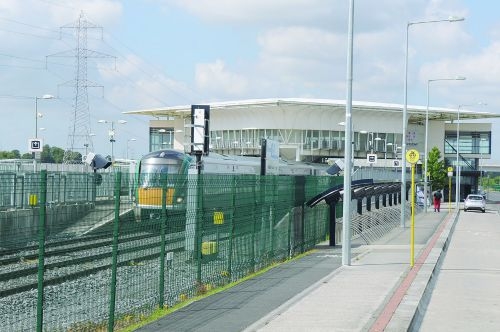 Park tunnel may ease traffic in Lucan, Clondalkin and Ballyfermot

COMMUTERS in Lucan (Adamstown), Clondalkin (Fonthill) and Cherry Orchard (Parkwest) are set to enjoy better services to the city centre – once to the €13.7 million Phoenix Park Tunnel re-opens in autumn 2016.

Transport Minister Paschal Donohoe officially launched the works to upgrade the tunnel on Tuesday.
Funded by the Department of Transport Tourism and Sport, through the National Transport Authority, the facility will allow passengers on the Kildare Irish Rail line, to loop around the north inner city and depart at Connolly Station.

Heuston is currently the last stop for commuters on the Kildare line, including those getting on in Adamstown, Fonthill and Parkwest, with Luas and bus services the options for the last 3km into town.

Lucan Fine Gael Councillor William Lavelle, who has lobbied the NTA and Irish Rail over the last six years to re-open the tunnel, welcomed the launch of physical works.

Councillor Lavelle said: “This proposal represents common-sense planning – using existing unused infrastructure to maximise public transport capacity. I have been a long-time supporter of the need to reopen the tunnel.

I believe it will provide a sustainable short- to medium-term solution to bring more Lucan and Adamstown commuters direct to the city centre and docklands, and in turn, will reduce traffic congestion and aid both the regional economy and quality of life.

“The opening of the tunnel and provision of a direct rail link will also support residential development in areas such as the Adamstown SDZ (Strategic Development Zone) where a rail station is already in place.”
Up to four services per day will use the tunnel from autumn 2016.

However, passengers travelling through the new tunnel will have no option of exiting at Heuston because of a lack of connectivity between platforms.

The tunnel was opened in 1877 and is 757 yards long. Currently the line is in use for freight services and transfer of trains between maintenance depots. Proposals to reopen the tunnel were incorporated into a €900m Integrated Implementation Plan 2013-18.