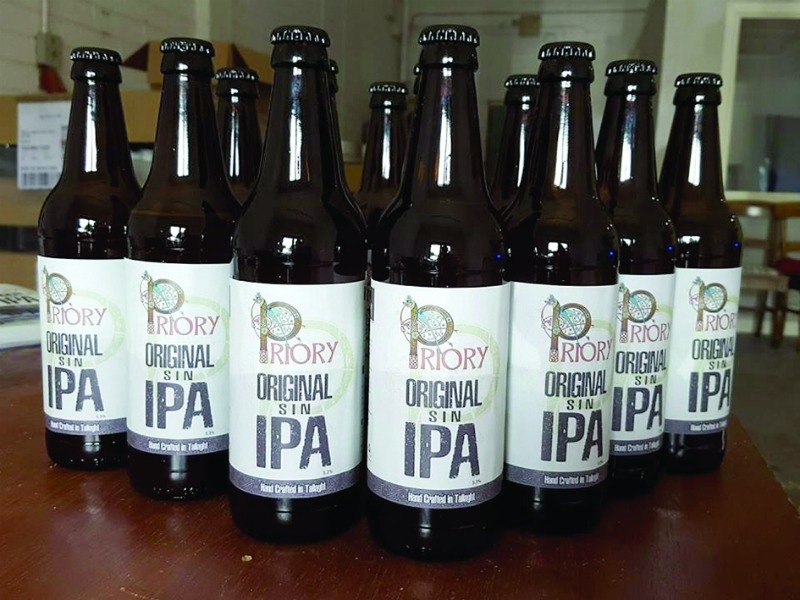 A NEW micro-brewery in Tallaght Village is raising a glass to the past and toasting the area’s rich heritage, which saw a small brewery and hop garden located on the grounds of the Priory more than 250 years ago.

The craft has now been revived by Priory Brewing which, run by Partas, the enterprise development agency in Tallaght, is the country’s first social enterprise brewery – with all profits being reinvested into local economic development and jobs.

According to the history books, the Archbishop of Dublin once built a summer palace on the grounds of where the Priory now stands, with the holiday home incorporating a small brewery and hop garden.

After a lengthy dry season, of approximately 250 years, Tallaght is back brewing – with the revival of the craft celebrating the area’s heritage while also adding to the growing artisan food culture both in Tallaght and the surrounding South Dublin County.

For their first beer, Priory has brewed an American Style IPA called Original Sin, which, according to its tasting notes, has citrus, tropical and fruity tones with a good malty background.

John Kearns, the CEO of Partas, which is also behind the County Fare speciality coffee house, said: “When I first mentioned that I thought we should start a microbrewery, there was a series of gasps and puzzled faces.

“When I explained why and how I believed it could fit into a wider strategy to put Tallaght strongly on the food map and encourage other artisan producers, it seemed to make more sense.

“Now it seems normal but 18 months ago it seemed mad.

“It has been a massive learning curve but we have had a lot of luck and support along the way.”

According to Mr Kearns, Priory received a lot of support from the craft beer community and the South Dublin Local Enterprise Office.

He also praised award-winning brewer Seb Kondol who has just moved to Tallaght and is the enterprise’s master brewer.

“The craft beer market in Tallaght is in its infancy but growing and I think it is important that we have a real local beer for visitors to enjoy and for locals to feel proud of”, Mr Kearns said.

“We plan to develop a full range of quality and innovative beers and to encourage more and more locals to explore and enjoy the excitement and flavours of genuine small-batch handmade beers.

“Once they discover the taste of real beer, they’ll embark on a fantastic voyage of discovery that will become a lifetime pleasure.

“When they do, I hope that Priory Brewing will be a key part of that journey.”