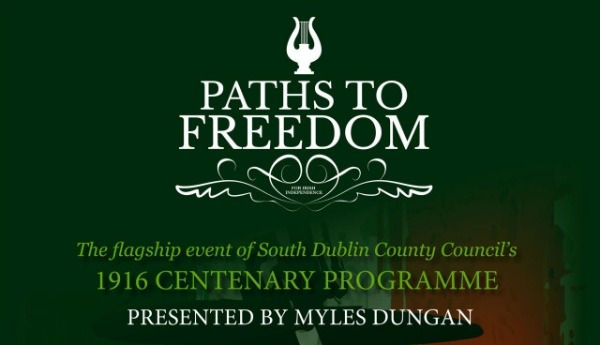 Paths to Freedom in Tallaght Stadium

Called Paths to Freedom, the free event aims to explore the many “shades of green” that existed in the run-up to the Easter Rising, and to show how 1912 to 1923 was a pivotal decade for the nation.

Fronted by RTE broadcasters Myles Dungan, Joe Duffy and Turtle Bunbury, the council’s Paths to Freedom programme will bring together a team of authors and academics to talk about the legacy of 1916 – alongside a cast of international performers who will showcase songs and music from the time.

The event will include a day-long programme of talks on 1916 delivered by a number of well-known faces include Joe Duffy, who will discuss Children of the Rising, RTE presenter and author Turtle Bunbury will take explore The Personalities of the 1916 Rising, and Elizabeth Gillis, who has written a series of books about the Irish Revolution, will look at What Did the Women do Anyway?

That evening, a performance of the songs and music of the era will take to the stage and include the songs of John Count McCormack, Lena Ford, Ivor Novello, Stanley Kirkby and George M Cohan.

The event is free and open to the entire community, but booking is essential.