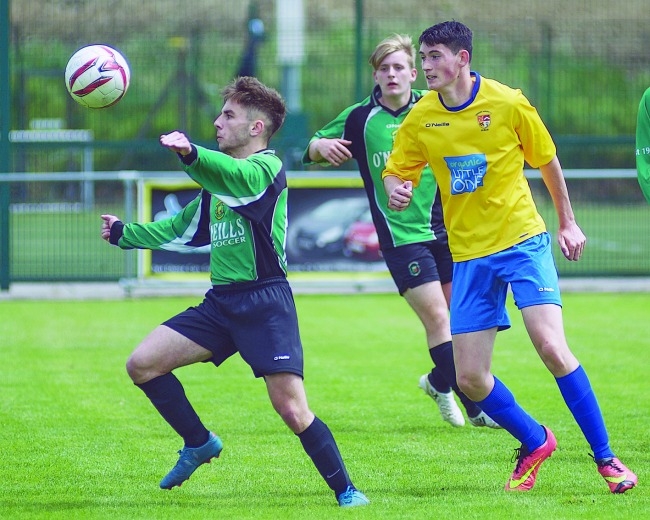 Peamount drive on in Ferrari Cup

PEAMOUNT United eased into the last 16 of the Ferrari Cup with a thumping 5-1 victory over Terenure Rangers on Sunday afternoon at Greenogue.

The Newcastle side took the lead through Richie French but were initially pegged back through a Sean McKeever strike.

However they dominated the game and the ball and went in at halftime with a comfortable 3-1 lead after a brace from Joel Bekombo, before second half strikes from Yemi Adbesin and Stephen Hughes put some gloss on the scoreline.

On the day Peamount could have scored a lot more, and controlled around 70% of the possession in the game as they created chance after chance.

Bekombo had three efforts blocked in the first 15 minutes, including a bicycle kick cleared off the line, before he turned provider for the first goal.

A fantastic through ball put the onrushing French through on the inside left and he made sure the Peamount dominance counted with a cool finish.

Three minutes later though Terenure had clawed one back after a long ball up towards the United goal sparked confusion between goalkeeper Tommy Duff and defender Sam O’Gorman, and McKeever nipped in to take advantage and roll under Duff for 1-1.

A similar mix up was to be Terenure’s undoing on the half hour. After defending ably for so long a similar mistake gifted the easiest of chances for Bekombo to open his account, and he added a second three minutes later after a splendid assist from Jordan Hanway.

The second half began positively for United who had added another goal within five minutes of the restart, as substitute Adbesin combined with a lovely one-two with Hanway before firing home Peamount’s fourth.

Hanway nearly added to the scoresheet himself after dribbling through three Rangers players himself but he hesitated on the shot and blasted wide, before Tolu Bello missed with a spectacular volley off a corner and Terenure cleared away two goalmouth scrambles which looked like certain goals.

The fifth strike did come when a Hanway free kick was met impressively in the air by Bekombo whose header rattled the crossbar and fell to Hughes who tapped it into the empty net.

Hanway’s quest for a goal was denied on the line once again after three takes before pulling back to Hughes, who blasted wide with two minutes to go.