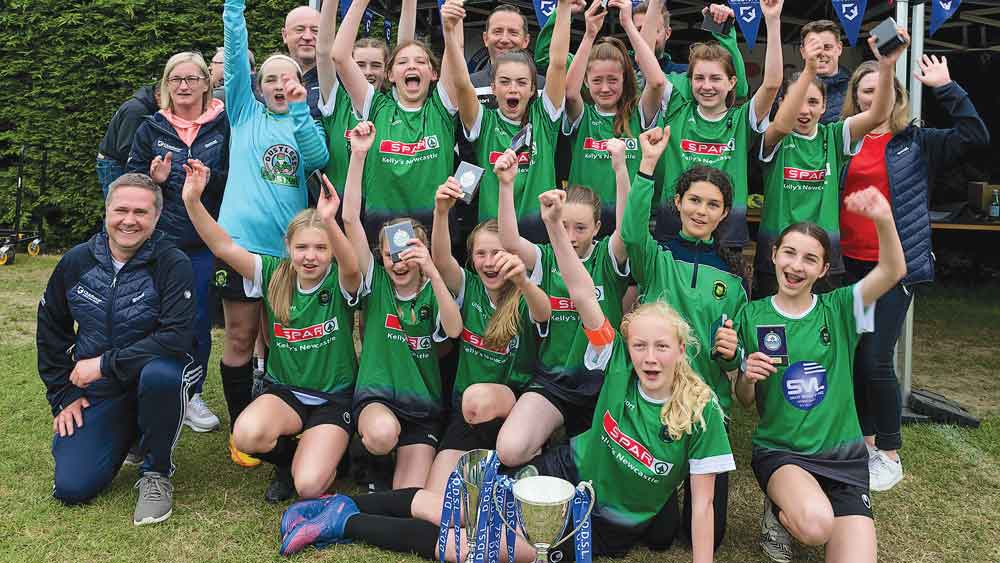 The Peamount team celebrate their victory

Peamount refuse to Stepaside in Under 13 Cup title match

A DRAMATIC close to the Under 13 Girls Clubforce Cup Final on Sunday at the AUL Complex saw both Stepaside and Peamount United exchange goals as they ended normal time deadlocked at 1-1 before the Newcastle outfit continued on to win 3-1 after extra time.

Stepaside are the only team to have beaten the DDSL Under 13 League One leaders this season and they looked like they might well do it again when Maya Shakanungu burst through on to a long ball, squeezing in between two defenders and shooting home with some 13 minutes remaining.

For the Peas, it looked like it might just be another one of those days after they had coughed up more than their share of openings throughout this match.

Wingers, Sarah Reynolds and Lucy Taaffe had proven a constant thorn in the side of their opponents, digging out a number of chances, but Stepaside goalkeeper, Lilian Tobin was immense on the day.

Indeed, she pulled off some top-drawer stops from the likes of Ava Prizeman and Chloe Doyle as Peamount sought a way to breach the opposing rearguard that was ably led by centre half, Zoe Whelan while team mate Laura Soloman was earning plenty of plaudits at the other end of the pitch.

The Peas eventually made the breakthrough in the closing five minutes by way of a sublime strike from Taaffe that hit the crossbar and bounced down over the line.

Having rekindled their hopes of securing the first part of a possible double this season, Peamount continued on to take control of the tie in extra time.

A long ball over the top by Doyle afforded Sarah Reynolds the opportunity to nip in between the Stepaside netminder and defender to poke the ball home.

And they made certain of the victory in the second half of extra time when Taaffe played the ball into the path of Prizeman and her strike took a deflection on its way to the target.

The cup win will be a huge boost for these Peamount players who are hopeful that another couple of victories in the league can see them also add the divisional crown to the club cabinet later this season.

Pick up your copy of The Echo for more coverage and pictures from the DDSL  Cup Finals.