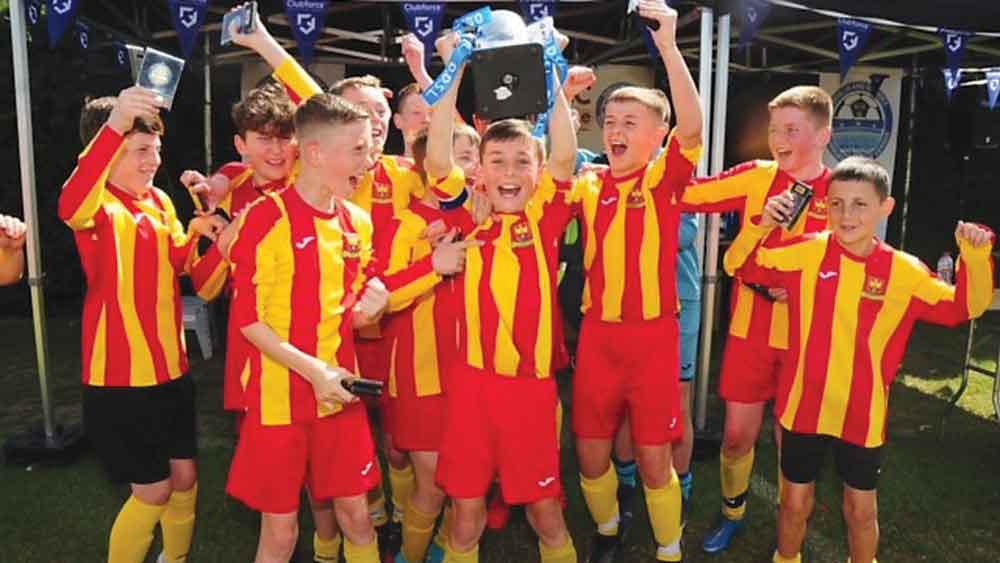 THERE was more ecstasy than agony felt by Kilnamanagh AFC last weekend as their Under 14 and Under 12 boys teams lifted their respective cups while the Under 12 girls were stopped short.

In the DDSL Under 14 Harmon Cup Final, the Tallaght side recorded a well-earned 2-0 win against a tricky Cabinteely outfit at the AUL Complex on Saturday.

While Darragh Walsh, Billy O’Neill and Josh Delves went close for the Tallaght outfit, goalkeeper Alex Forde was kept busy down the far end of the field and pulled off an outstanding save to keep the game scoreless at the break.

The opening goal came from the diligent Delves when he burst down the left wing and hit a speculative strike that looped into the net.

As Kilnamanagh pushed on to extend their lead, captain Callum Kenna and Dylan O’Malley were resolute in defence while Tadhg Worthington dictated the flow of the game through midfield.

With a few minutes remaining, Juda Nevin doubled their advantage with a top-drawer 25-metre free kick that found the top corner.

Aside from a penalty shootout loss in the All[1]Ireland, Kilnamanagh have now gone 25 games undefeated and secured the DDSL Major One League after going on an excellent run.

In the DDSL Under 12 Topflight Cup Final, Kilnamanagh secured their second piece of silverware of the weekend after surviving a late barrage of attacks from Ardmore Rovers to run out 2-1 victors.

Fifteen minutes in, Alex Hogg had the ball in the back of the Ardmore net after some nice interplay between Charlie Smith, Kyle Leonard and Sean Kelly.

Shot-stopper Matthew McLoughlin then shut out a close-range effort to send his team into the break a goal to the good.

The Rockets turned the screw on the restart with Kelly and Josh Keegan stretching the play down the left wing and Jamie Sinclair marshalling the backs.

All of the pressure finally resulted in a goal, Hogg bagging his second of the match after being located by Nathan Robert-Byrne with a flick-on header.

The Bray side started to come into the game in the final few minutes and Kilnamanagh captain, Evan Kavanagh, who had displayed great leadership throughout, put in a last[1]ditch tackle to deny a sure[1]fire goal.

Rovers did eventually get their score when Jack Corrigan hit a brilliant free kick before Kayden Delaney pulled off a brace of goal-line clearances to see Kilnamanagh over the line.

It was not to be for Kilnamanagh in the MGL Under 12 Girls Academy Cup Final as they fell short of the mark, losing 1-0 against a strong Balbriggan outfit at the Oscar Traynor Centre on Saturday.

Pick up your copy of The Echo for more coverage and pictures from the DDSL  Cup Finals.