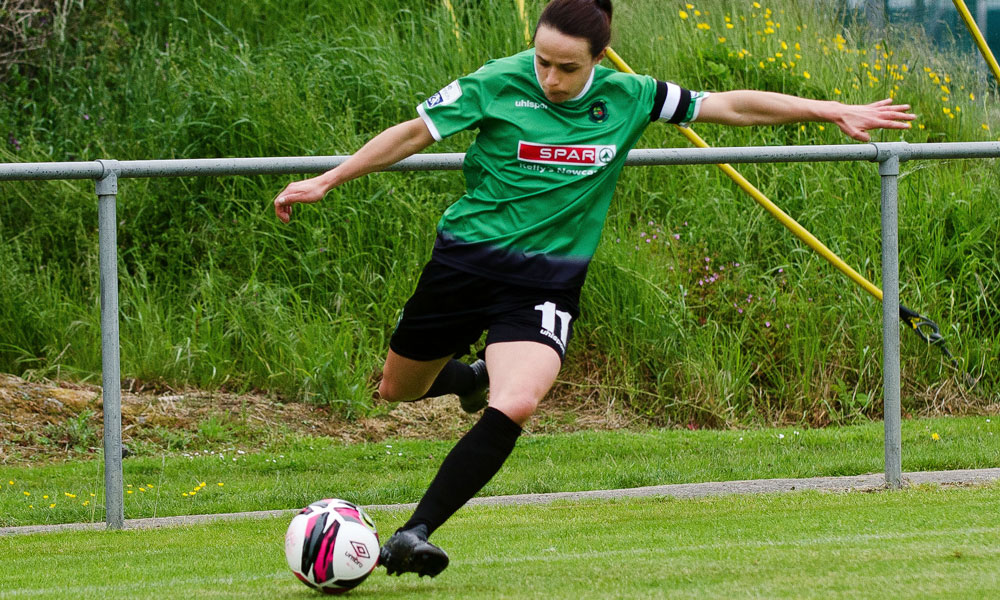 Fresh from representing the Republic of Ireland on Tuesday, Aine O’Gorman was lining out on the right-wing for Peamount (file pic)

Champions Peamount United opened up a four-point lead at the top of the Women’s National League table with a convincing 3-0 victory against Bohemians at the Oscar Traynor Centre in Coolock this afternoon.

Either side of a Tiegan Ruddy penalty, the experienced duo of Stephanie Roche and Karen Duggan found the net to secure a second consecutive Dublin derby success for the three in-a-row chasing title holders.

Thanks to a 5-0 win over near rivals Shelbourne in Greenogue two weeks ago, the Peas entered the latest series of games at the summit of the WNL.

In addition to being one clear of their Drumcondra rivals, James O’Callaghan’s charges also had a game in hand.

With Shels being the idle outfit in a nine-team league this weekend, Peamount were presented with a perfect opportunity to enhance their credentials.

Lining up alongside Dora Gorman in central midfield, Tiegan Ruddy forced a fine stop out of Courtney Maguire from a free-kick in the fifth-minute.

A native of Celbridge in north Kildare, Ruddy also had a long-distance drive tipped behind the posts just shy of the half-hour mark.

Bohemians – who are vastly-improved in their second season in the WNL – subsequently breathed a sigh of relief when Peas striker Sadhbh Doyle rattled the crossbar with a thunderous strike.

The hosts had looked set to hold out until the break, only for their much-fancied opponents to finally open the scoring on the stroke of the interval. Off a Ruddy corner, Roche rose high to head to the back of the Gypsies net.

Fresh from representing the Republic of Ireland in their friendly triumph at the expense of Australia on Tuesday, Aine O’Gorman was lining out on the right-wing for Peamount.

After she was fouled inside the box on the hour, Ruddy stepped up to the spot and doubled her side’s lead in clinical style.

This offered additional breathing space to the Newcastle outfit and with Duggan firing home from close-range on 65 minutes, Peamount eased towards another big win in the context of this season.