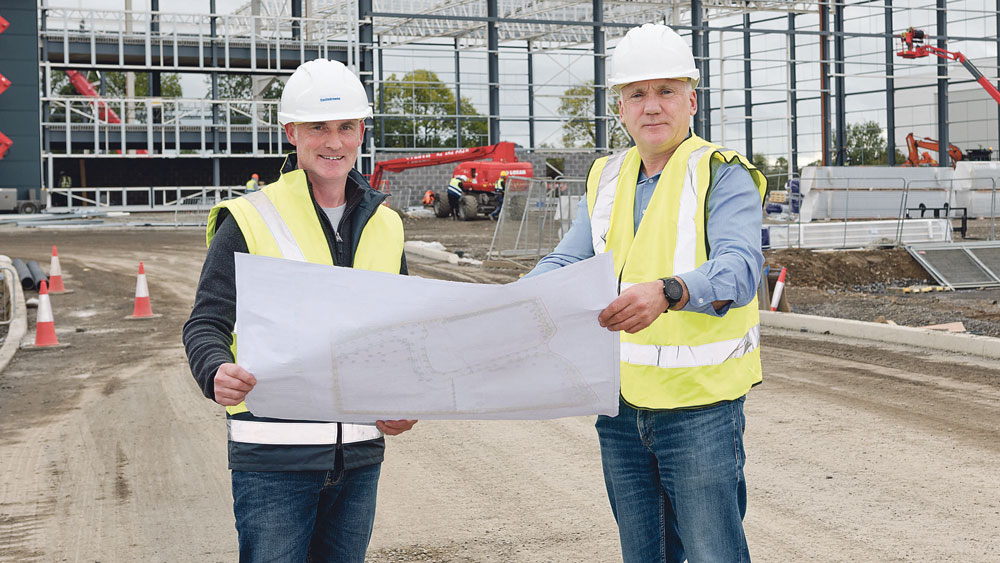 Colin Brady and Con McCarthy, MD of Greenogue and Aerodrome Business Park, on a site being developed in Greenogue

AN EMPLOYMENT hub which represents some 450 businesses and 7,000 employees, have warned of serious shortcomings in available land for SME’s – fearing no space left in any traditional industrial estates in the county by the end of the current development plan next year.

Con McCarthy, MD of Greenogue and Aerodrome Business Parks, made a submission to the South Dublin County Development Plan (2022-28) to address a “crisis” in relation to the availability of Enterprise and Employment land in the draft development plan.

“I have known for some time that we have a serious problem in terms of the availability of such land for the traditional indigenous Irish small to medium sized companies but even I didn’t realise it was as serious as it is until I saw the attached report prepared by JLL and another prepared by CBRE,” said Mr McCarthy.

Although there is approximately 1,200 acres of available industrially zoned land in the county, this is less than 100 acres when Grange Castle, (FDI targeted sites), and land already owned by data centre operators is taken out.

With regard to data centres, Mr McCarthy has “no problem with the principle of building as many as providers want to”.

“It’s all really good long term investment and while they don’t provide that much direct employment they buy serious amounts of support services from locally based indigenous companies. The strategy of keeping Grange Castle for FDI is the right one and both the council and the IDA deserve a lot of credit for making it what it is.

“There clearly is a short term energy demand issue around them that needs to be tackled but putting a stop to them would be a very damaging knee jerk reaction.”

Mr McCarthy sent a letter to councillors outlining the concerns facing small companies in the sector.

“The big picture is do they recognise the need for rezoning and where they might rezone,” he said.

He said for new companies that want to relocate from REGEN areas, moving to Fingal or Kildare is “currently the only option they have” even if most of the staff are “largely from the Clondalkin/Tallaght/Saggart/Rathcoole/ areas”.

Woody O’Neill, Director, Industrial, JLL, fears a perfect storm lies ahead for smaller industrial businesses, already losing out on bids for increasingly smaller lots on places like Ballymount, unless land becomes available to them.

“Greenogue is a prime destination for these businesses but is effectively out-of-bounds now,” said Mr O’Neill.

“Citywest is more upmarket and Grange Castle even more so, but where does the guy with a van and a digger go? Greenogue has been a focal point for the last 15-20 years as evidenced by the types of occupier there. They need to make more land available. Data centres and FDI’s should be happy enough with what they have.”

Mr McCarthy acknowledges he has a “vested interest” in this “but that doesn’t take from the fact that I am one of the most experienced developers of industrial property in Dublin and it’s my job to know where I’m going to find sites to keep doing what we do to meet the demand.

“Industrial land values in South Dublin have risen by about 400 per cent in the last four years, admittedly from a low base in 2017/2018. But values are now at levels beyond which it makes no economic sense to build warehouses or small industrial units. This is not being caused by data centre development, its being caused by no supply of zoned land in the county,” McCarty explained.

Demand has surged in recent years, and McCarthy says every week they handle enquiries from an average of five/six companies looking for space but they are unable to find them space.

“The majority of these companies are small, employing less than 20 people, but like everywhere else they are the backbone of the indigenous economy.”

JLL’s Woody O’Neill said another problem is “there is not much land in Kildare either” but stresses the need for a healthy mix of businesses.

“The market is very fluid. Some sites can change very quickly, but you need that eco-system. Another element often missed is Ballymount is quite tired in terms of things like energy ratings. That’s coming too. This (zoned) land needs to materialise,” said O’Neill.

Mr McCarthy is concerned that the draft development plan “seems to insist” there is opportunity for growth “not only in Greenogue/Aerodrome but also across Fonthill, Clondalkin Industrial estate and Magna Business Park”.

“The facts are that by the end of the current plan next year there will be no space left in any of these estates,” he said.

McCarthy said technical reports they provided the council on flood risk and aviation safety “prove conclusively that there are no technical impediments” preventing the proposed lands being developed for EE as use “as part of a natural extension of Greenogue”.