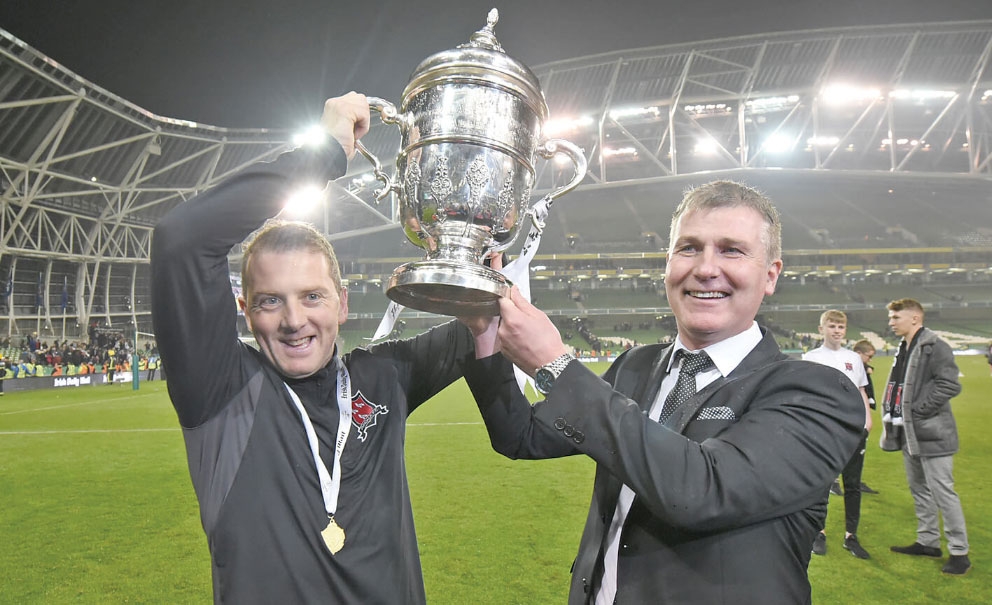 Perth excited with challenges ahead with champions Dundalk

Perth, from Killinarden, takes over from another Tallaght man who was announced Ireland U21 manager and future senior manager.

Perth, a former Cherry Orchard and Longford Town player previously managed Malahide United and was assistant manager at the Lilywhites since 2013.

His new role will be responsibility for all footballing activities across the whole of the club.

Former IT Tallaght soccer manager John Gill, who led Dundalk Football Club to promotion in 2008 in his previous spell with the club, will have specific responsibility for the first team, and will be assisted by Perth on first-team matters.

Head Coach, Vinny Perth said: “I am delighted to have been appointed Head Coach at Dundalk Football Club, and am excited by the challenges ahead, namely defending our League of Ireland and FAI Cup trophies, and embarking on another European campaign.

“I’d like to thank the Chairman, and the rest of the board, for showing faith in myself, Ruaidhrí and John, as well as for their great support on and off the pitch.

“I feel strongly that continuity is the key to taking Dundalk Football Club forward, a view that the board also share. I look forward to working with all the staff at the club, and I particularly wish to welcome John Gill back in his new role.”

“As First Team Coach, John is someone who will bring vital experience, hard work and dedication to the club. John and I have shared football ideas and philosophies for many years and I am excited to work with him.

“John brings a huge level of experience to the management team.”

“I would like to stress to all supporters of Dundalk Football Club, that all the planning and preparation is well underway as we embark on our pre-season schedule.

“After a gruelling but highly successful campaign in 2018, everyone at the club is motivated and ready to get going again. I’m looking forward to seeing all of our supporters in February for our first league game against Sligo.”

On his appointment as First Team Coach, John Gill said: “I’m looking forward to returning to a club that I know well, and I’m hugely excited about the challenges that lay ahead. I have a great affinity with the town, a great fondness for the supporters, and this opportunity was something I simply could not turn down.”

“I believe this to be a very exciting period in the club’s history. We will work together as a team and look to grow and improve, with the aim of delivering more success to Dundalk Football Club and its loyal supporters.”

“I am returning to a club that I know well – it is a club that has improved greatly since I was last here. I believe I can play a role in delivering more success to the town and consider this to be an exciting time in the club’s history. In Vinny Perth and Ruaidhrí Higgins the club have an excellent pair of coaches, and I am excited to work with them as well as all of the players and staff.”