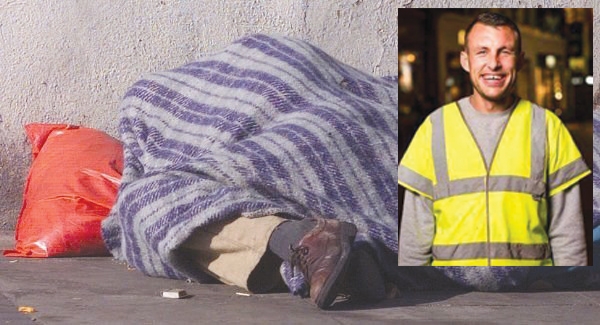 A BALLYFERMOT man who works “full-time” helping homeless people, will walk the walk, and sleep on the streets for a week-long vigil in the city centre, from November 15-22.

Peter Murphy (31), from Thomond Road, has a background in helping others, having established a hugely successful homeless mobile soup run in Grafton Street two years ago.

The initiative started when Peter began handing out goods from a trolley to people in need from Kylemore to the Luas.

After moving to a pop-up table on Grafton Street, the mobile run today feeds approximately 400 people every Sunday, and up to 150 meals on a Wednesday.

“In the summer, I did a sleep-out for one night, people said that was easy. So, I said, as we are going into the arctic weather of winter, I will live as a homeless person for a week, in a sleeping bag, walking the streets 7am to 11pm, no smokes, no food, using the homeless resources available.”

Through his volunteer work on the streets, Peter has got to know many people, and he says it hurts when anyone passes away.

He continued: “There have been eight deaths in the last couple of months. It’s really hard when you do know them. We don’t get a date for the funeral. It hurts not being able to say a final goodbye. We do light a lantern at the soup run to show they are not forgotten.

“Last night, I counted 68 people on the streets, including kids. People are going through the HSE, they end up meeting someone on the street, taking tablets then heroin. We look on them as a person, not the homeless person they have become.”

Peter will be doing video updates on his Facebook page throughout the vigil.

“It’s going out in the wilderness, but it has to be done,” he said.

“It’s sad that I have to do it to give people an insight into what it is like for homeless people.”