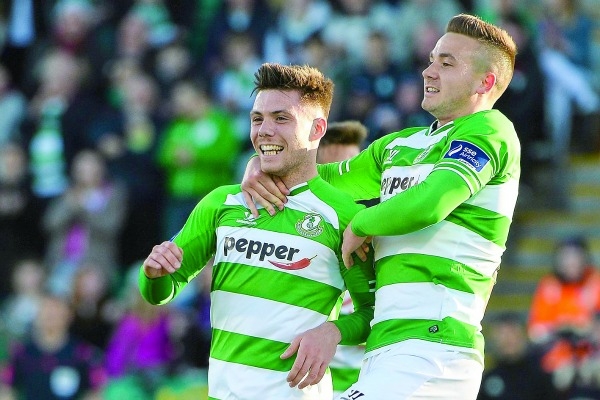 BRANDON Miele capped off a great season personally by landing the ‘PFAI Young Player of the Year’ Award in the Gibson Hotel on Friday night.

The Tallaght man fired home 11 goals in the league for Shamrock Rovers as the Hoops finished up third in the Premier Division, just two points adrift of Cork in second but a massive 13 behind back-to-back champions Dundalk.

Miele’s award came just a few weeks after he was declared Rovers Player of the Year- a remarkable achievement for the young competitor was only signed up by manager Pat Fenlon at the close of last year.

“It was great to pick up that award especially with it being my first season playing in the league and I was new to it all” Miele told The Echo.

“Winning the ‘Player of the Year’ for Rovers was great. I wasn’t expecting that. And then to win this [the PFAI] award just really capped off the season for me and I can enjoy my break now.

“I’ll be setting myself bigger targets for next season and hopefully I can win the ‘Player of the Year’ Award.

“Hopefully we’ll be bringing in some more players and can really challenge Dundalk for that league title” he added.

There was PFAI Award success also for another Tallaght man Stephen Kenny who scooped the ‘Manager of the Year’ honour.

Given the dominance of his Dundalk team this season, Kenny’s award win came as little surprise.
Indeed his side recorded back-to-back Premier Division titles before making it a double after they beat Cork City in the FAI Cup decider.

And it was the star performer in his Dundalk side, Richie Towell, who was declared the PFAI Player of the Year.

The former Crumlin United schoolboy found the back of the net no less than 29 times, goals that included the equaliser against Shamrock Rovers that clinched Dundalk the league as well as the extra time winner in the FAI Cup decider.