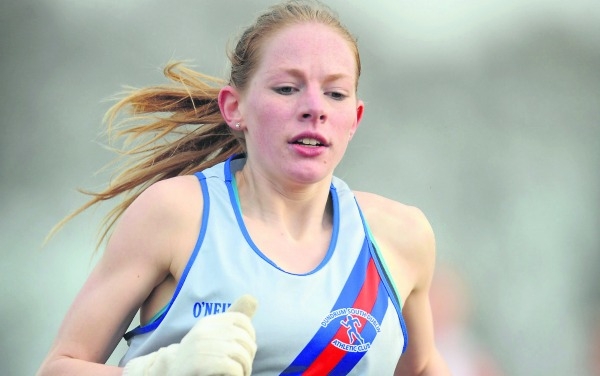 Fiona Clinton (below) was the first home for DSD in the senior section, finishing 14th with Maria McCambridge in 17th while their Under 23 athlete Meghan Ryan finished up in 28th.

The club boasted three runners among the first 11 finishers in the Junior Women’s event with Sophie Murphy and Niamh Carey in sixth and seventh respectively while Eimear Fitzpatrick was four places further back.

Nadia Power of Templeogue Athletic Club was also in action here and produced a great perform-ance to finish fifth.

In the Senior Men’s division Joseph Sweeney of DSD came home in fifth position with clubmate John Eves in 17th while Donore Harriers’ John Travers had to settle for 23rd.

The latter’s team mates Eric Keogh and Mark Dooley were not too far behind in 27th and 28th respectively with Rathfarn-ham’s Paul Stephenson crossing the line in 30th.

The Juvenile Under 18 Girls Cross Country Championships featured another impressive show by DSD with Sophie Murphy and Niamh Carey second and third respectively ahead of Eimear Fitzpatrick in eighth.

Carla Sweeney, running for WSAF, finished up seventh while in the Under 18 Boys Paul O’Donnell of the Dundrum club earned fifth.

There were also county medals won by Donore’s Lucy McCann and Eliza NiThighearnaigh, who were both stepping up an age group to compete in the Girls Under 18s race over 4km.

The former placed 28th overall while NiThighearnaigh came 36th- enough to see them emerge second and fourth scorers on the Dublin team that placed second behind Wicklow.

Again DSD accounted for three in the top ten of the Under 16 Girls contest in Abigail Taylor (third), Roseanne McCullough (fourth) and Grace Dervan (10th).

Donore Harriers made their presence felt in the Boys equivalent with Louis O’Loughlin (above) first home for them in third, Sekeriye Ahmed 15th and Faithi Aden 35th while there was a fourth place finish for Adam Harvey of DSD in the Under 14 Boys contest.

Elsewhere Donore athletes were to the fore in the Gingerbread 10k Road Race at Portarlington.

New member Anthony Flannery (35.54) was runner-up while Shane Russell (36.57) and Alasdair Brown (37.59) recorded personal bests on their way to third and fifth place finishes while there was also a PB for Ken McKeon (1.38.50) in the Gingerbread Half-Marathon.