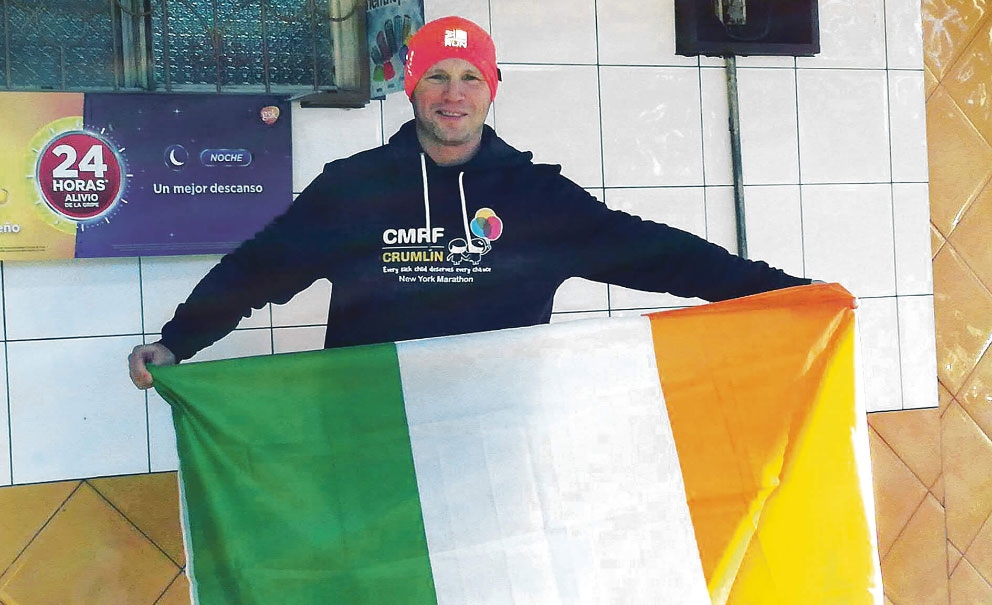 FIREFIGHTER Podge Thompson is back on home soil after conquering more than 200km of the Costa Rica jungle in aid of children’s charity CMRF – and also as a way to help improve his own mental health after experiencing loss in 2018.

On January 12, Podge started a six-day jungle challenge, which saw him contend with high altitude and humidity in a bid to raise awareness of and funds for CMRF (Children’s Medical and Research Foundation) Crumlin.

Living in Clondalkin, Podge is well known for his fundraising feats, which has seen the dad-of-two run marathons blindfolded and carrying a 40kg child mannequin.

Alongside raising awareness of CMRF Crumlin, Podge also donned his runners as way of taking positive steps in supporting his own mental health.

Looking back over 2018, Podge said: “I’ve had a tough year, I didn’t get to run the 2018 marathon in Dublin as unfortunately only a few days after getting married I lost my dad tragically in a road traffic accident and then a few short months later my beloved mam passed away due to complications with her treatment for cancer.

“I’ve been lost and I’ve searched deep to find answers and to be strong for my young family.”

Speaking with The Echo on his return, Podge said: “[The run] really helped me sort my head out.

“I was in a bad place after the last few months with losing mam and [my step-dad Ollie].

“This [run] has helped me immensely.”

Podge taking a rest during his jungle challenge

Originally Podge was due to run 160km however, he ended up clocking 207km over six days.

“We totalled 207km in total, mostly jungle running, along with huge mountain ascents over 3450m above sea level”, Podge said.

“The views were amazing, the jungles, the Pacific, the local villages and so much more.”

He added: “We slept in local houses, farms and ate the local food provided to us by strangers along the route.

“It was easy to forget that you were surrounded by wildlife.

“However, if you took a moment to look around, you noticed the huge amount of insects, spiders, howling monkeys and of course there was snakes!

“The country itself is fantastic…the people were so friendly.”

Podge was based at Tallaght Fire Station for a number of years before being recently transferred into Dublin Fire Brigade HQ.

To learn more about the work of CMRF Crumlin or to donate visit CMRF website.