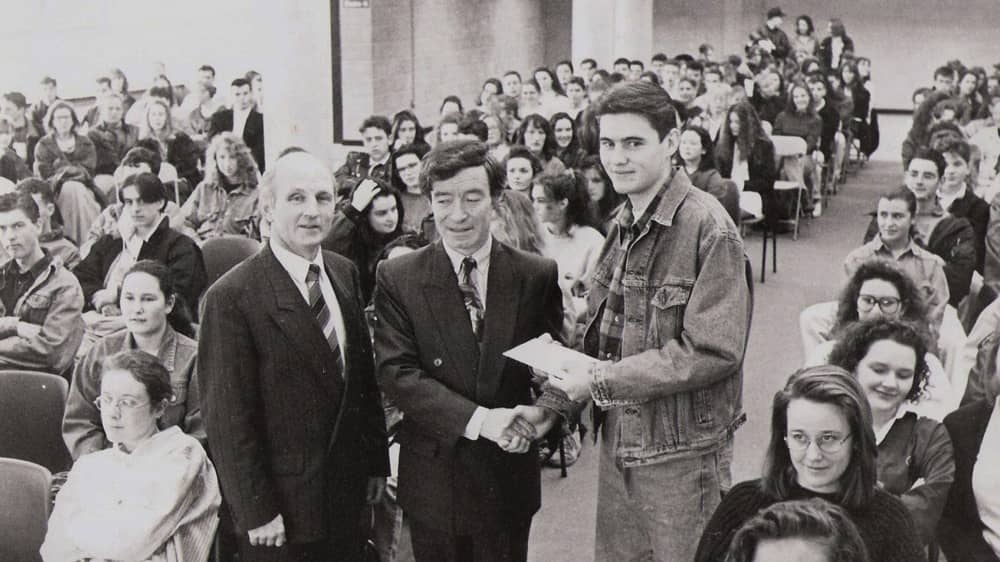 Point in Time: Barry on a day to remember in RTC

FOR Barry Lawler, his first day attending the newly-opened RTC Tallaght back in September 1992 was one he is not likely to forget.

Originally from Kiltipper Road and now living with his wife Sinead (a fellow former RTC student) and their three children in Kill, Barry was, that day, to become the college’s very first registered student.

“I remember the first day. I cycled down to the college and I met someone there and they asked ‘Where are you coming from?’ I said ‘I’m coming from Tallaght’.

“He said ‘Would you mind stepping aside here’ and I immediately thought ‘Jesus I’m in trouble already! What have I done?’

“So [Tallaght RTC Principal] Columb Collins comes out to meet me and he’s asking me my name and where I was coming from, where I went to school and so on. And then he says ‘thanks very much for that’ and so off I go.

“We were all meeting up at the library for induction day. So in I go and Columb Collins addresses the group and you could see Seamus Brennan arriving with his entourage.

“Columb Collins says ‘We’re grateful for the presence of the Minster of Education who’s going to enrole the first student. We’ve put all your names into a hat and we’ve pulled out Barry Lawler.’

Barry Lawler today with his wife Sinead and their three children Isabel, Sam and Sophie at their home in Kill Photo by Paddy Barrett

“I’ll never forget it. I said ‘What!’ The head goes back and the eyes close and I said ‘Oh my God. What is this?’

“So up I walk sheepishly with by enrolment papers to Seamus Brennan and he signs the form and we got a couple of pictures taken and then I’m presented with a voucher to the value of £250 which will cover my first-year books.”

For Lawler, his time in the RTC would have a profound impact on the course of his life both in a personal and professional sense as he was to meet his future wife, Sinead while studying there.

“I’m originally from Kiltipper Road and Sinead is from Clondalkin and we’re living in Kill now,” continued Barry.

“We were both on the business course, but were in different classes.

“We met at the end of the year at the club fair and we married six years later in 1999.

“It was great to have this college on your doorstep.

“I was doing a National Certificate in Business Studies. I saw a job advertised in the college for Irish Life and that’s what I’m doing now, working in Irish life Pensions Department.”