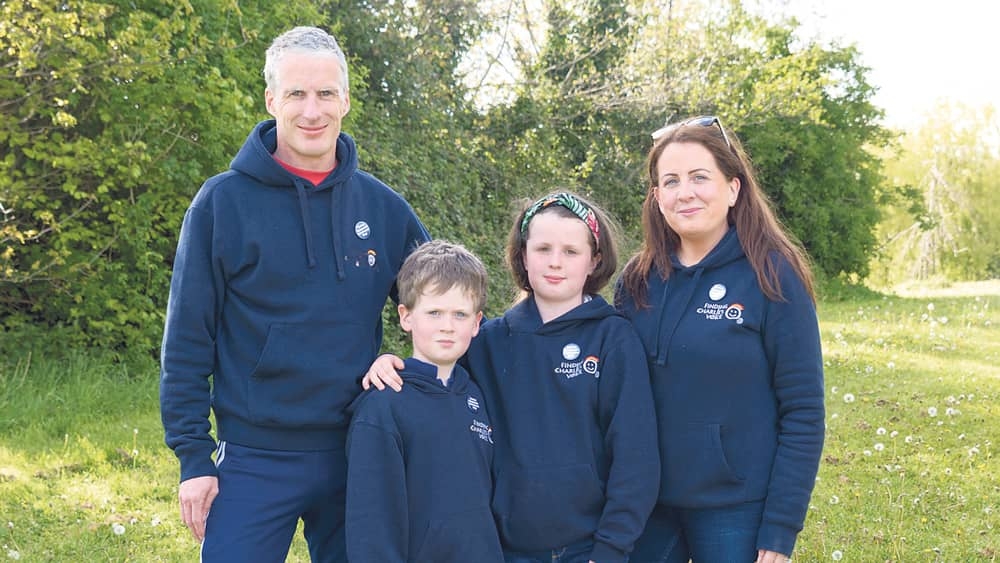 A MOTHER who was inspired by her own son’s diagnosis with verbal dyspraxia is helping to spread awareness for the condition through her organisation ‘Finding Charlie’s Voice’.

Evelyn Byrne founded ‘Finding Charlie’s Voice’ – a Lucan based organisation that helps raise awareness around verbal dyspraxia and supports families of children that have been diagnosed with the condition.

Charlie with parents Will, and Evelyn and sister Sophie

According to Evelyn, verbal dyspraxia is a relatively rare life-long neurological speech disorder in which children have difficulty in making and co-ordinating the precise movements needed to produce clear speech with their mouths.

The mother of two was inspired by her son Charlie (7) after he was diagnosed with verbal dyspraxia three years ago.

“Many speech and language therapists will go through their entire career having never come across a child with verbal dyspraxia – it is quite difficult to diagnose. It can only be diagnosed actively in therapy so the child will have to be with a speech and language therapist, and they rule out every other condition to be able to diagnose verbal dyspraxia,” explains Evelyn.

“We had him referred in June 2015, when he was a year and a half. We didn’t get seen by the HSE until he was two and a half for a speech and language assessment and we were told he had a severe expressive language delay, but they never mentioned verbal dyspraxia.”

Evelyn says that when the family decided to see a private doctor that Charlie’s characteristics were considered as typical markers for verbal dyspraxia, and he received an official diagnosis when he was four years old.

Charlie is now in senior infants and has support and help from resource teachers to help him keep up with the curriculum.

“He has access to resource teachers so they will do things like try teach him how to spell or how to say words, because Charlie cannot say the words he is trying to spell. It is very difficult for any child that has a speech and language communication need to be able to keep up in the classroom,” Evelyn told The Echo.

In March this year, it was reported that almost 45,000 children across Ireland were on waiting lists for speech and language assessments and therapy, according to figures from the HSE.

Evelyn says that the children on these long waiting lists are being limited and not being offered the same opportunity.

“How can a child like Charlie honestly access a curriculum effectively.? They can’t unless they are supported and have parents that can afford private speech and language therapy, then they get no therapy, and they can’t learn how to speak,” explained Evelyn.

Finding Charlie’s Voice is centred around supporting all children with speech and language communication needs, which was set up on the foot of Charlie receiving his diagnosis with verbal dyspraxia.

The Facebook page was set up as a tangent to the private support page as a platform to share Charlie’s journey and to give hope to other parents and to advocate and put pressure on the relevant government departments to allocate more funding and resources for children like Charlie.

One initiative that has come out of setting up Finding Charlie’s Voice are communication boards, which is a physical aid for children that have difficulties speaking and communicating.

After working with a speech and language therapist to develop the boards over the last year, Finding Charlie’s Voice have so far donated 86 boards to schools, with another 70 to go out shortly which will have a reach of 30,000 children.

The communication boards have been hugely beneficial to children, according to feedback from teachers and principals the boards have opened up a “communication opportunity” for children with speech and language difficulties.

Although having a child with verbal dyspraxia has its difficult moments, Evelyn says that she feels “privileged” to be in this world that has enabled her to learn about complexities with speech and the difficulties that parents face when their children have speech and language problems.

The month of May marks verbal dyspraxia awareness month.

People are encouraged to wear blue and post a video or a picture of themselves to try and get #verbaldyspraxia trending to raise awareness.

NEWER POSTFrank Nevin to retire as director of Economic, Enterprise and Tourism Development in council
OLDER POSTPoint in Time: Barry on a day to remember in RTC