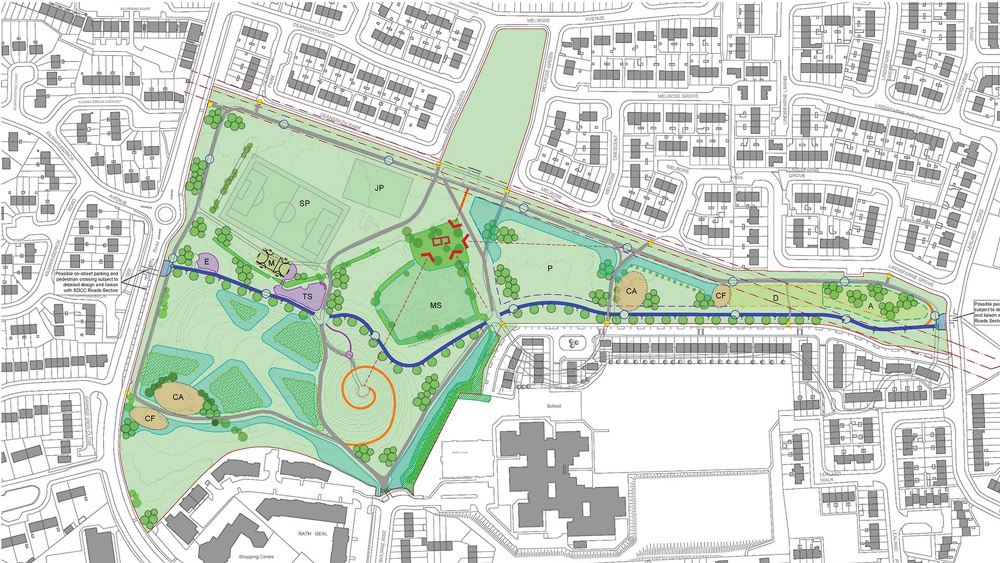 St Cuthbert’s Park will see works costing €1.15 million to start in the park

WORKS OF €1.15 million to develop St Cuthbert’s Park in Clondalkin were approved this week at South Dublin County Council.

The Part 8 proposal follows years of planning to improve a park which has suffered from scramblers, drug dealing and illegal dumping.

Included in the works are cycle/walking routes, a children’s playspace, a multi-use games area with floodlighting, a teenspace area, a dog run, new planting, and even a proposed arboretum with edible fruits and nut trees.

Teresa Walsh, Director of Environment, SDCC said there would be “an enhanced maintenance regime” put into St Cuthbert’s on the back of the proposed works.

Speaking at the council meeting, Ms Walsh said the park has been “problematic in the past” with anti-social activity.

She cited the high level task force set up a number of years ago for St Cuthbert’s which included elected members, SDCC officials, local sports clubs, resident groups, and gardai.

“The three or four years the high level group has been meeting, we have built up some good relationships, and it has improved the park, to get it to a point now where we are ready to make further investment in the park,” said Ms Walsh.

According to the report presented to members, liasons with gardai to address issues of vandalism, crime and anti-social behaviour in St Cuthbert’s Park, will continue.

“In addition, the proposed spine route will encourage increased use of the park as a through route and make it more accessible for the purpose of policing, particularly by the Garda Mountain Bike Unit who already operate along the Dodder Greenway and Grand Canal Greenway,” said the report.

The provision of additional CCTV cameras within the park will be further considered at detailed design stage in conjunction with gardai and subject to the requirements of legislation.

The proposed lights are located along the main spine foot/cycle path through the central part of the park.

The proposed facilities football club include an improved playing pitch (increased drainage), and addition of a junior pitch, as well as possible on-street parking to alleviate problems on match days

Local councillors welcomed the plan, the general consensus that is even better than initially thought.

Cllr Francis Timmons (Ind) said the plan goes “above and beyond” while Cllr William Carey (SF) said Clondalkin Celtic FC have been “instrumental” in creating a sense of active participation in the park “over the past number of years.”

NEWER POSTDraft budget for council comes in at over €300m
OLDER POSTGrow up! Saibh has plenty of music to share with the world