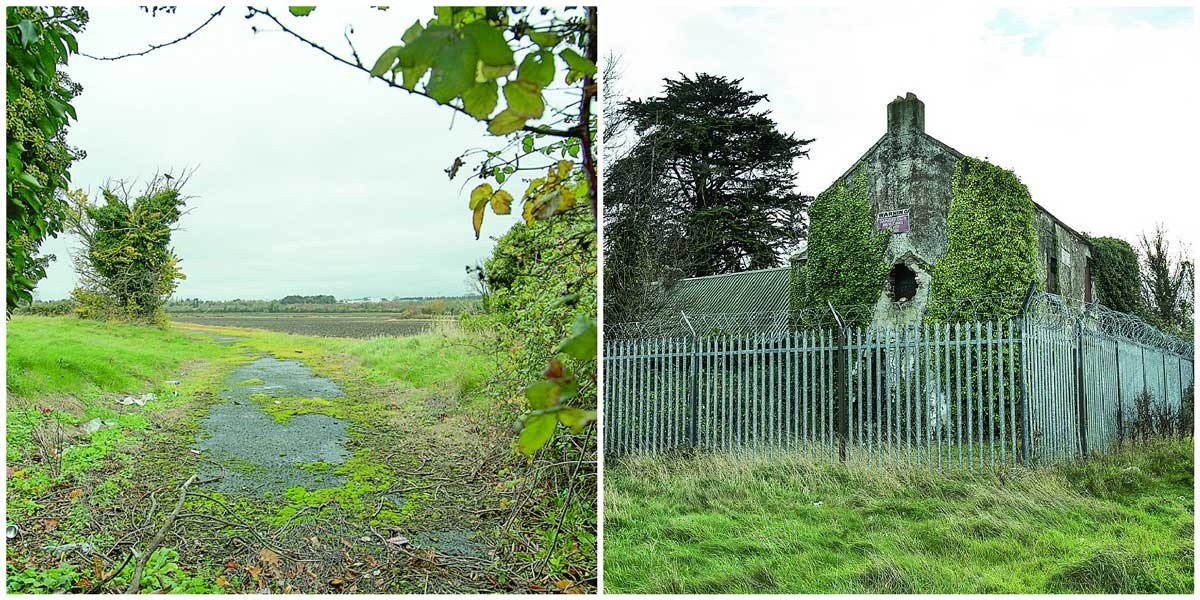 The investment company is to pay €27 million for 92.5 acres it is acquiring from the Irish Rugby Football Union (IRFU), and €1.7 million for 5.8 acres from a separate party.

Just some of the land sold in Newlands Cross this week (left), the Katherine Tynan protected structure is on the land (right)

The IRFU will be entitled to an additional payment if the land is re-zoned from agricultural use in the next 10 years.

In the early 2000’s the IRFU and the FAI had planned to build a stadium there before they chose to redevelop Lansdowne Road.

Richard Ball, chief investment officer of Hibernia, said it is “delighted” to have agreed these acquisitions, which take Hibernia’s total holding in the area to 143.7 acres.

He said: “The land is located within eight kilometres of Dublin’s city centre and benefits from excellent transport infrastructure, including the Luas Red Line and the M50 and N7 motorways.

“It is an ideal candidate for mixed-use development, including a large element of infill residential.”

The land is currently zoned for agricultural use. However, if the land acquired from the IRFU is re-zoned in the next 10 years, then the rugby union will be entitled to an additional payment equating to 44 per cent of the market value of the lands at that date, less what Hibernia Reit has already paid for it.

The house, which has fallen into disrepair was once the home of poet Katharine Tynan.

According to a South Dublin County Council spokesperson, “I wish to inform you that Whitehall House (Katherine Tynan House) is a Protected Structure under RPS Ref. 197 (Schedule 2, CDP, 2016-2022).

The IRFU had sought planning permission to demolish the house but permission was refused after objections were lodged by the Tynan Society and the Kingswood Residents’ Association.

On Monday, the IRFU also released a short statement confirming that it is “the vendor of a c. 92 acre site at Newlands, Co. Dublin to Hibernia REIT plc for a sum of 27 million euro”.

IRFU Chief Executive Philip Browne said, “The IRFU regards the delivery of a sustainable, long term additional income stream for investment in the domestic game, for the benefit of clubs and schools, as one of its key priorities.”

Mr Browne said that the IRFU had identified the sale of lands at Newlands “as imperative to delivering on this objective”.

He added, “It will now allow the Union the opportunity to progress investment options which will, in addition to securing a new realisable asset, produce an additional, long term income stream to support further development of the domestic grass roots game on this island, in the decades to come.

“It is also envisaged that a portion of the proceeds will be provided for new club and playing facilities development programmes.”