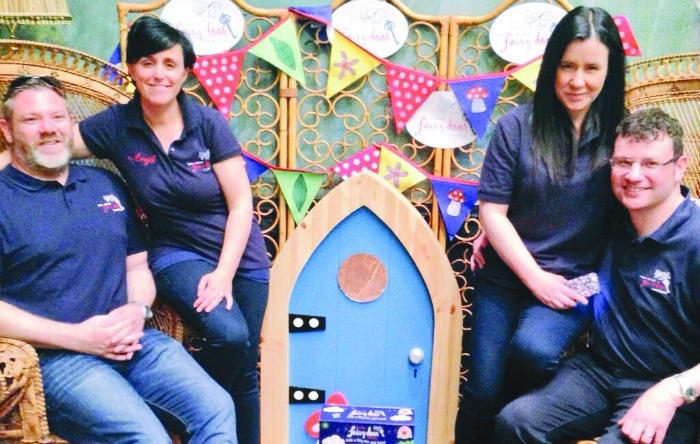 The Irish Fairy Door company was set up in 2013 to ensure that the housing needs of the Irish fairy population were being adequately addressed.

They were specially selected by the Fairy Council to provide handcrafted fairy doors for all locations – be it your home, your garden, the office, school or care centre.

Actually made by their carpenters in the workshop of a 200 year old cottage in the heart of Ireland, each fairy door is given a portion of magic so that your new fairy can come and go between our world and Fairyland.

We spoke to Niamh Sherwin Barry, Chief Story Teller with The Irish Fairy Door Company, about the journey from idea formation to worldwide distribution.

What was your motivation to start your own business back in 2013?

“Like many people, myself and my husband, along with our business partners Aoife and Gavin, had been hard hit by the recession and found ourselves out of work.

Myself and Aoife had previously bought fairy doors and were one day discussing the things we’d done to make them more magical for our children. Then it clicked.

While what we had bought were just pieces of wood, we had created an entire magical experience! We saw what we could do and what could be done, we saw it’s potential.”

“From those 4 people at the start, we now directly employ 23 full time staff.”

What was your biggest challenge early on?

“Undoubtedly, it was our lack of start-up capital. We literally didn’t have a tenner to rub together between us.

We knew we had a wonderful idea, both conceptually and financially, we knew it would work but we had no spare money.

Luckily, my Mother was able to help us out. She had stopped smoking 9 years previously and gave us the €8,500 she had saved from doing so.

We’re still not sure if she believed in the idea or just wanted to keep us in the country! We were very close to emigration at this stage!”

How do you feel you are different from your competitors?

“We’re the market leader in the fairy door business right now, and for good reason. While there were fairy doors in existence before us, our brand was a new concept within this area.

Other companies were selling just little pieces of wood, there was no magic, no follow up work after the initial sale. We were first out of the blocks with the magic we created.

While we do have some real competition now, people have bought into the magic we provide.

Once one of our doors is bought, you can register the name of your fairy and we will provide news, stories and activities every Friday without fail. We provide the full service.”

What is the next step for The Irish Fairy Door Company?

“Well we can now safely say that every second child in Ireland has a fairy door. We’re in a strong position nationally, now we want to replicate this in the UK and in America.

We’ve hired PR companies in both areas so that we can start to really get our name out there.

While Irish people are fantastic at supporting their own and recognising a great story behind a business, this isn’t something we can rely on abroad. We need to get past this and get our genuine magic out there.”

How have you been received internationally?

“We’ve been received very well. Ireland is viewed across the world as a land of mythology, magic and fairies, and we’re also liked too!

The Irish are storytellers by trade, and we’re bringing that worldwide. Through our storytelling, we’ve even created a whole new world called ‘Fairy Valley’!

In the US, we knew the amount of positive goodwill there is towards Ireland, so keeping the name ‘Irish’ in our brand was a definite positive for us.

We weren’t so sure about the UK though, but we researched the matter and actually discovered that our rich mythological heritage was known and loved in the UK!”

How did the South Dublin Local Enterprise Office help you when you were starting out?

“They were fantastic from the very start! Our business advisor truly understood what we were trying to do. She got it, and she believed in us.

It was a confidence we needed as a small operation. We were guided through the entire process, and we received the maximum amount of funding available at the time. I can still remember getting the phone call off of my husband, saying we’d gotten the money. We were all balling crying!

What is the main piece of advice you’d have for budding entrepreneurs?

“I’m creative and a great communicator, yet I haven’t a clue of numbers or the more technical side of the business. This I know, but I’m surrounded by people who can cover these gaps in my knowledge, while I cover for theirs.

If you have a good idea that you can sell, get likeminded people around you, have a team! Even if it’s just two people! I’m convinced no one person has every skill needed to do this all on their own.

Even if it means giving a piece of your business away, you need to surround yourself with good people.”

And finally, where can we find your magical fairy doors?

“Our website is the best place to find our products, we’ve a selection of doors and accessories that you can choose from.

Our site also has a list of all our stockists internationally for those who want to but in-store.”