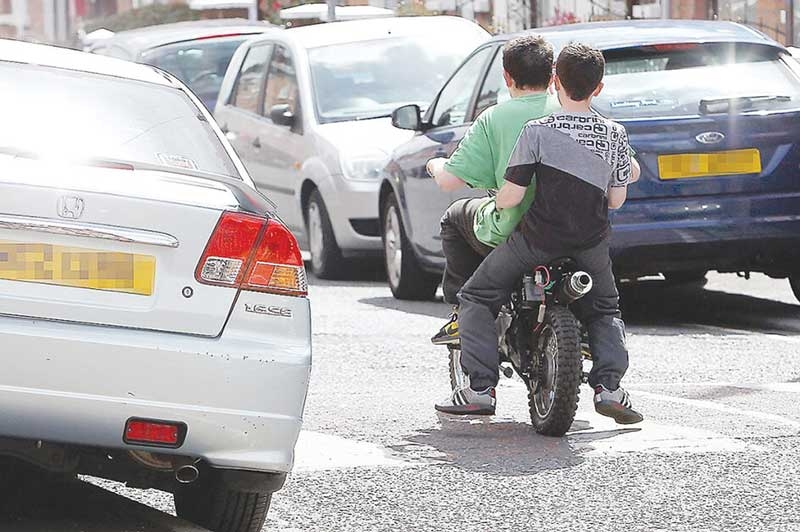 Quads and scramblers have a negative impact on community

CHRISTMAS scramblers and quads are revving up a storm in local communities, with councillors already receiving complaints concerning an increase in these vehicles since December 25.

The use of scramblers and quads in estates is a long-standing, year-round issue, with the presence of these vehicles in residential settings endangering lives, creating noise pollution, causing intimidation and destroying public spaces.

Every Christmas there is a notable increase in quad and scrambler activity, with this year being no exception.

Despite South Dublin County Council, An Garda Siochana and Motor Cycling Ireland joining forces to create a parent-targeted, information campaign on the use of scramblers and quads, they were still purchased in many households as Christmas presents.

Tallaght South councillor Martina Genockey (Labour Party) told The Echo: “There has been an increase in scramblers and quads since Christmas Day… with Killinarden particularly bad on Christmas Eve.

“I already received complaints, especially from the residents in Killinarden.”

She added: “These bikes are so dangerous both for the people on them and the kids playing in the area.

“After the health and safety risks, these bikes are wrecking green spaces and making them unusable for local children as they can’t play in these areas as quads and scramblers are flying around.

“Lots of younger children also get bikes for Christmas but they can’t use them on their own road because of the quads.”

The issue of scramblers and quads has been on South Dublin County Council’s agenda for many years now, with a long list of cross-party councillors raising the issue on behalf of the community.

Due to the number of complaints and the negative impact quads and scramblers are having on community life, the council has established a taskforce to focus on the issue.

“The council really is doing all that it can and as a councillor this is a very frustrating issue”, Cllr Genockey said.

“It is such a dangerous issue and councillors worry so much for the young people on them and the wider public.”

She added: “It is more of a Garda issue but it seems that the legislation isn’t strong enough.

“This issue really needs to be addressed at Government level.

“[Parents also need to come on board], obviously people don’t want to put their child or any other child at risk but they are.”

The information leaflet created by South Dublin County Council stresses that scramblers and quads are not toys and that the misuse of these vehicles can lead to fatalities and serious injuries.

It also states that the vehicle must be appropriate to the age, size and strength of the rider and that it is recommended that all riders were protective equipment, helmet (mandatory), boots, body armour and gloves.

It reminds the public that these vehicles are designed for off-road use and in a controlled environment, stressing that it is illegal to use these vehicles in a public area if vehicle standard requirements are not met.

Any bikes that do comply with vehicle standards and can be used on a public road must have a registered number plate, insurance, road tax, lights and reflectors.

Riders on bikes off-road must be a minimum of 16 years and hold an A1 category driving licence.

Further information can be found at www.sdcc.ie

Quad and Scrambler Bike Riders – Be Safe and Responsible from South Dublin County Council on Vimeo.