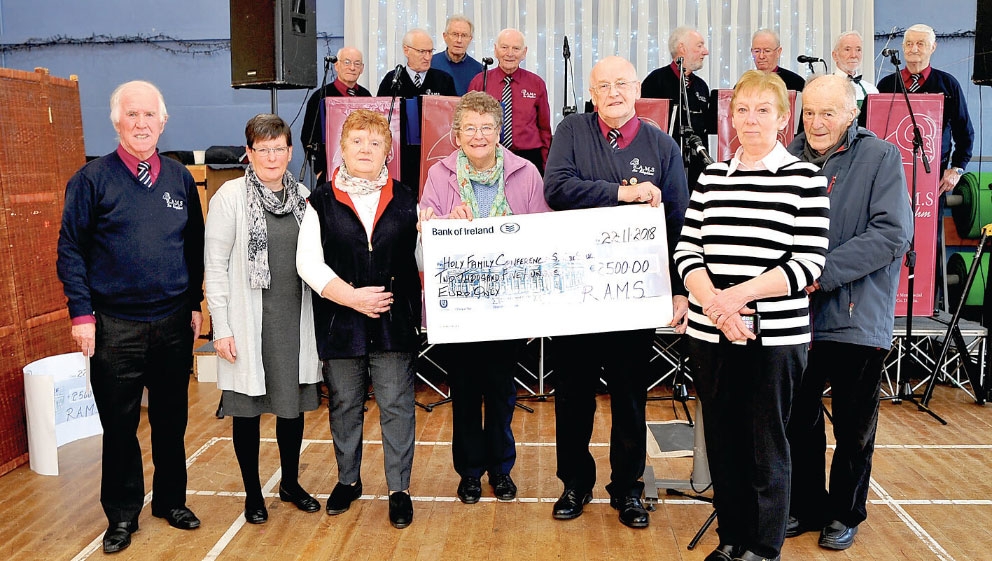 THE impact community-led projects can have was very evident when active aged ensemble RAMS in Rhythm raised more than €10k for four charities.

Meeting once a week in St Finian’s Community Hall, Newcastle, the group engages in a range of activities such as darts, pool and bowls.

Over time, a singing group also emerged, with 17 members now part of RAMS in Rhythm – which raise the roof of venues both local and further afield for charity.

This year, RAMS produced an 18-track CD for charity, with the aim of raising €10,000 for four charities – Capuchin Fathers, Laura Lynn Foundation, St Vincent de Paul and Down Syndrome Kildare.

After selling 10,200 CDS in eight months, RAMS made a cheque presentation of €2,500 to each of their four charities during a social inclusion celebration in St Fenian’s.

The cheque presentation was incorporated into an event being organised by South Dublin County Council for Social Inclusion Week.

Speaking with The Echo, Matt Dowling of RAMS wished to thank everyone who supported the fundraiser, which received “lots of local support”.

He added that it is great to see a community group like RAMS, which received support in the early days, now in a position in give back and support others.

RAMS is hoping to continue with its fundraising in the run-up to Christmas, with 12 charity and community gigs planned between now and December 21 – with 300 more CDs being made due to demand.