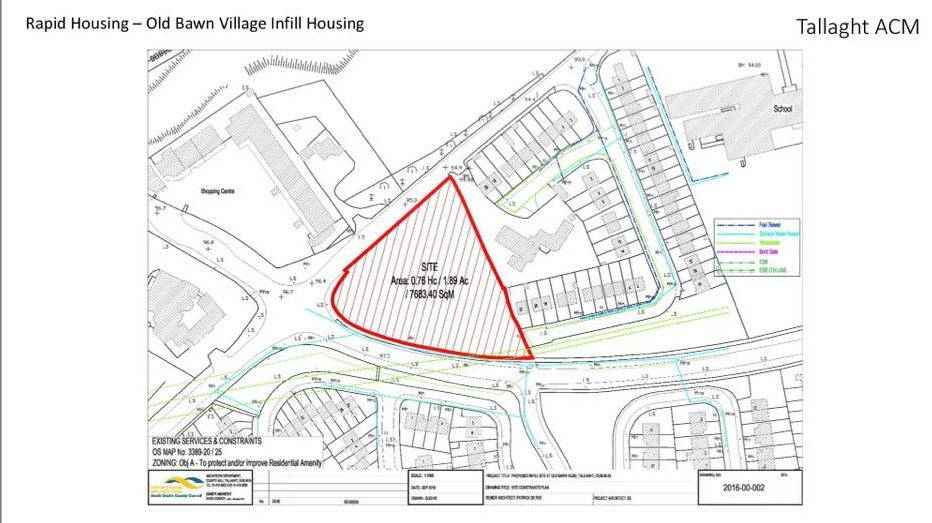 PROPOSALS are being considered for the construction of a 20-unit, rapid-build housing development on a prominent site at the junction of the Old Bawn and Firhouse roads, The Echo can reveal.

The council confirmed to The Echo that the proposal would be going to Part 8, public consultation, in the coming weeks, after it advises the Rathfarnham/ Templeogue-Terenure committee.

Sinn Féin councillor Cathal King, who is the chair of the council’s Housing SPC (Strategic Policy Committee) told The Echo: “I think this is a good location for housing.

“There was a proposal for a two-storey school on this site [which didn’t happen], and it was after this that the SPC made a recommendation for housing.

“This proposal will go to the public for consultation and we will be talking with the local schools and the neighbouring estates.

“We hope residents will engage with us and see that the council is trying to alleviate some of the problems on the housing list.
“There are currently 9,000 people on the housing list and we hope to build houses right across the county that families can move into . . . and get out of hotel rooms.”

He added: “The council is looking to identify lands throughout the county . . . and the money is there for these developments under the rapid-build programme.”

Cllr King also stressed how the site, opposite the Old Bawn Shopping Centre, has access to necessary infrastructure such as schools, shops and public transport.

When contacted by The Echo, a spokesman for the council said: “This proposal for housing is on the schedule for progressing for social housing.

“The details of which will be advised to the members of the Rathfarham/ Templeogue – Terenure Area Committee prior to display of the Part 8 proposal.”

He confirmed that town houses is the current proposal.