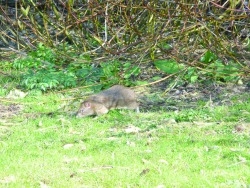 been raised by a local resident who lives near the park and has witnessed a number of rats scurrying across the feet of people in the public areas of the park.
An increased number of rats were also spotted within the open and public areas of the Tymon North end of the park by an Echo reporter back in April.
The concerned resident told The Echo: “I used to go walking and jogging every day in the Tymon North end of the park, and I wouldn’t go near the place now.
“I was there last week, and the rats are running all over the place and coming from the ponds and trees. There are bushes, trees and grass overgrown everywhere.
“The rats are running along the fields where people sit and have picnics, and where they walk along the paths.
“The playground that used to be there is now terrible and is being used now as a toy-car racecourse and as a dump.
“The ducks are over in the housing estate in Tymon North looking for food, and are laying eggs in the estate. It’s probably because of the rats that they have to go somewhere else. No wonder they’re in our estate.
“What was once a lovely park has turned into a horrible place that nobody wants to go to, and if you go down there at any time of the day the rats will run out in front of you.
“It’s a disgrace there, but other areas of the park are lovely, such as down by the Greenhills end of the park.”
As previously reported in The Echo, work on a new playground for the Tymon North end of the park is expected to go to tender in the coming weeks, with work due to begin by the end of the summer.