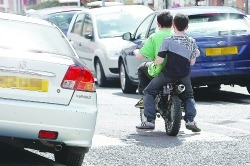 GARDAÍ are currently engaged in ongoing checkpoint operations, to try and put the brakes on the scrambler bike scourge, which has spiked over the summer months.

The Echo has reported how unregistered scramblers are a major source of concern in areas across the county, causing intimidation and noise pollution for residents and sports clubs.

A lack of funds to replace the old garda scrambler vehicle in Tallaght, has been labeled a ridiculous situation, by Sinn Féin Councillor Cathal King.

Cllr King raised the issue at a recent Joint Policing Committee, and was disappointed to learn funds were not available to buy a new garda scrambler bike.

“They used to have a bike, which could pull up beside them, but it broke down, and they haven’t got the funds to repair it. It’s ridiculous,” said Cllr King.

“They are cheap enough to buy. It’s a crazy situation, not the fault of the gardaí, but if they had a scrambler, they could do a job. As things stand, garda don’t want to chase them in case there is an accident.”

He continued: “There have been situations where teams like Jobstown FC and Brookfield Celtic can’t play on pitches because they are wrecked by scramblers. There is also concern for child safety.

“At the Tallaght Rehabilitation Project in Kiltalawn House, service users are engaged in holistic sessions in tranquil settings, but all they can hear at times, is the noise of the bikes in the field behind the building. Preventative measures like kissing gates are required at certain locations.”

Tallaght gardaí seized a scrambler in Dodder Valley Park in recent weeks – a senior garda source said the objective was to “prevent the activity through the ongoing checkpoints.”

There have also been incidents reported in Clondalkin and Ballyfermot over the past few weeks.