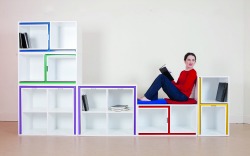 Not just a piece of furniture

DUBLIN designer Orla Reynolds is already on the way to being one of the most sought after Irish furniture designers in the business.
Based in The Synergy Centre on the campus of IT Tallaght, Orla has already been showcased at a number of talent exhibitions and is currently in the process of marketing her unique and innovate designs which will be available from retailers in the coming weeks.
Orla took some time out from designing to answer some questions for The Echo about her company and what inspires her to create.

How did you get involved with furniture design?
I somewhat fell into it. I trained for 16 years to be a ballet dancer. Unfortunately after receiving a place in The Urdang Academy in Covent Garden in London to begin a degree in professional dance, an injury ended my career very abruptly. Doctors didn’t know what was wrong with my legs so I was told to sit for a year. I became a receptionist for two years and then went on to join the bank when there was still no diagnosis. Eventually after four years I found a doctor who realised it was an injury more commonly known in men who play rugby so they didn’t think to look in a ballet dancer. I had leg surgery on both my legs and was fixed but I was too old to be a dancer. I decided to go back to college. I applied for a range of courses like fine art, design, journalism and film. I was offered furniture design. The first product I ever created in the first semester of first year, called ‘The LapStop’ a storage unit for laptops and devices went on to be a finalist for the House and Home Student Design Awards, I got a bit of a feeling I might have a knack for design!

Your designs are very innovative – were you very creative as a youngster?
I was constantly making things as a youngster. I’d make presents, I’d make the box for the presents to go into. I’d make cards. I would always be making, sewing, knitting, weaving, anything. I loved to make boxes and figure out new ways to construct them. I wanted to be a fashion designer for many years and at 15 I dropped out of school and I was the youngest to be accepted into The Grafton Academy of Fashion Design for a two year diploma. I stayed three months before I was convinced to go back and do my Leaving Cert!

Tell us about ‘As If From Nowhere… Bookcase’ and what inspires you?
My company draws its vision from a love of dance and the magic of the theatre. Simple, clever and functional products are created through imagining the home as a stage. Observing how our lives play out within the four walls informs each product created to utilise space.Some products signifying a scene change like the As if from nowhere… bookcase.

You were part of the Fresh Talent exhibition at the National Craft Gallery in Kilkenny earlier in the year, what was that like?
The Fresh Talent exhibition was wonderful to be a part of. I was very grateful to Angela O’Kelly, the curator, for selecting me. I gave a talk on ‘Conception to Market’ on the process I am going through to commercialise the As if from nowhere… bookcase. I will be giving this talk at two other events later in the year. I also held two workshops on Set Design for kids which I will be doing again later in the summer at another venue to be confirmed. The Fresh Talent Exhibition is open in the Coach House at Dublin Castle until September 2.

What are you working on at the moment?
I am working on the commercialisation of the As if from nowhere… bookcase. It is a long process but we are in final sampling stage with first batch delivery expected in the next few months. I am also preparing for London Design Week in September where I will be exhibiting at Designjunction.

What are your hopes for the future?
My hopes are to keep being inspired by what I’m doing. I will be prototyping the next collection over the next few weeks which will get launched in Milan in April 2016. I hope to continue to grow the product range and the team and continue to establish an Irish Brand on an International Stage. I also hope to continue my work as a Set Designer which I do from time to time. That is hugely inspiring and one of my favourite things to do.
For more information about Orla or to see some of her designs visit www.orlareynolds.com