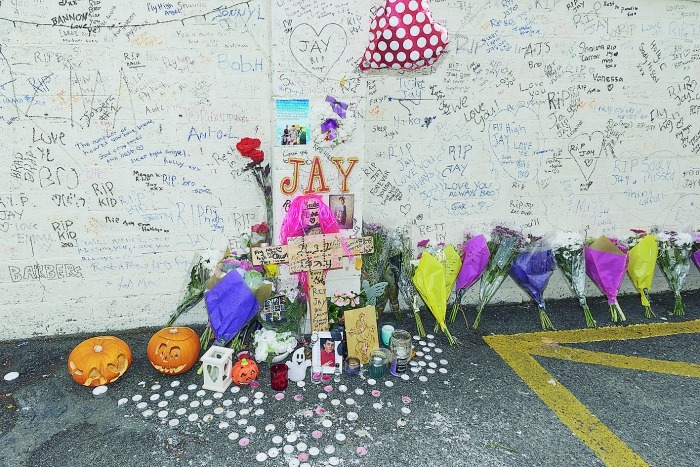 REACH OUT: ‘There was so much love for Jason’

A MOTHER who lost her 17-year-old son to suicide last month has encouraged young people feeling down to reach out for help – and to never let one moment of despair take away their future.

In the early hours of Saturday, September 24, Janice McCarthy’s life changed forever, when she was told that her teenage son Jason had lost his life to suicide.

A past student of Mount Seskin Community College in Jobstown, Jason, who had just started a barber’s course, was found by three passers-by on the High Street in Tallaght.

Speaking with The Echo, in the hope of helping other young people, Jason’s mam Janice, said: “Jason was in top form, he was the best he had ever been and was doing a barber’s course, had just been to his debs and was already planning ahead to January when he would turn 18.

“He wanted to get a tattoo for his 18th and was working on me to say yes – and was also hoping to get driving lessons for Christmas.

“He was a lovely fella who was mad into his PlayStation and football and he had lots of plans, he was looking forward.”

Janice, who lives in Kiltalown, added: “I believe Jason made a split decision that night, for some reason he felt in that moment that it was his only option – but it wasn’t. There was so much love for him.

“I am asking other young people to please not see what Jason did as an option, don’t let one moment take everything away from you.

“Suicide is not the answer, it takes everything from you and leaves behind such devastation.

“Any young person who needs help please go and talk with someone, anyone.”

Since Jason’s tragic passing, his friends have turned a location on High Street into a spot to remember the 17-year-old, with groups of young people visiting the area, both day and night, leaving flowers and messages.

Understanding the comfort that Jason’s friends are getting from having a place to visit, Janice has encouraged her son’s peers, and any other young people who have lost a friend, to ask for help if they are struggling and to continue living their own lives.

Janice told The Echo: “The devastation that suicide leaves behind is unbelievable.

“I haven’t been down to the High Street, but Jason’s friends, who have been a fanstastic support to me, have told me of the comfort they get from visiting it.

“However, Jason would want all of his friends to continue with their lives, to go back to school, go to college, do their exams and not to be drinking and going downhill.

“What happened to Jason is nobody’s fault and his friends need to continue with their lives. Do it for themselves and Jason. We all have to keep going, me included.

“Remember, Jason is not there at that spot, he’s in all of our hearts and always will.”

Janice, who has two other children, a toddler and a 14-year-old daughter, has thanked local supports such as Anam Cara, Swan Family Support in Fettercairn, the Hope suicide prevention drop-in centre and Mount Seskin Community College for being on hand to support her family.

However, the Tallaght mother believes that crisis support is necessary 24/7 for the family and friends of a person who has lost their life to suicide.

“I have received some fantastic support locally,” Janice said.

“However, there needs to be 24/7 crisis support for the family and friends of a person who loses their life to suicide.

“People need somewhere to go within their own community that has no waiting lists, somewhere that is easy for them to get to and that has an open door 24/7.”

Mary McLoughlin of the Hope suicide prevention centre on Main Street, Tallaght, has met with some of Jason’s friends in recent weeks.

She told The Echo: “I would encourage young people not to let themselves go down this route, or to think that there is no way out or no light at the end of the tunnel.

“There is always light, always help, always an answer . . . just talk with someone.”

‘There is always help, always a light’ – reach out

The Hope suicide prevention centre is open every Tuesday in Trustus House on Main Street, Tallaght from 7pm to 9pm.

The service can also be contacted out-of-hours by private messaging the Facebook page or calling 087 1363082.