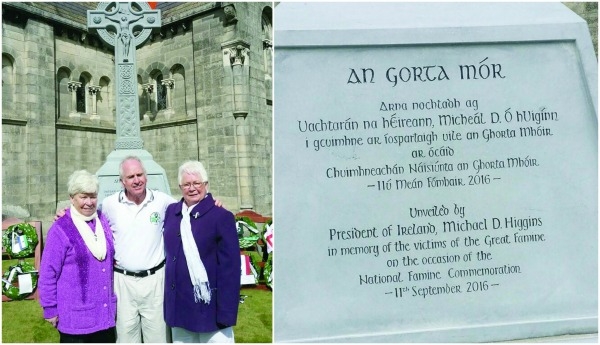 Remembering those who died in the famine

AFTER years of campaigning for a permanent memorial to the Famine victims, a Tallaght family stood proud on Sunday as a mid-19th century Celtic cross to remember those who died in an Gorta Mor was unveiled by President Michael D Higgins.

Raheen resident Micheal Blanch, who founded the Committee for the Commemoration of Irish Famine Victims (CCIFV) with his family in 2004, was instrumental in the development of a National Famine Memorial Day – which was first introduced in 2008 by then-Taoiseach, Brian Cowen.

Since the first memorial day was staged, CCIFV has continuously lobbied for a fixed date for the commemoration on the nation’s calendar – alongside campaigning for the introduction of a permanent memorial to the Famine victims in Glasnevin Cemetery, which is the largest burial ground of those who lost their lives in an Gorta Mor.

Michael Blanch told The Echo: “The Celtic cross which dates back to Famine times is a very fitting memorial to those who lost their lives in the Famine and we must thank the Glasnevin Trust which kindly donated it.

“The CCIFV started as a local campaign here in Tallaght and grew nationally and then internationally and it’s down to the pressure of the campaign that a permanent, national memorial was finally erected.

“Glasnevin Cemetery is the largest burial ground for the victims of the Famine yet there was no monument to mark their final resting place.

“However, we now have a fitting memorial after 170 years – which will symbolise and remember all of the victims of the Great Hunger who lie in unmarked graves both here in Ireland and abroad.”

The cross was unveiled on National Famine Memorial Day, which was held in Glasnevin Cemetery on Sunday, September 11, in the presence of President Michael D Higgins and the Minister for Arts, Heritage, Regional, Rural and Gaeltacht Affairs, Heather Humphreys TD.

Speaking on the day, President Higgins said: “This memorial stone will stand here beside the other important memorials of this cemetery as a testimony to our national remembrance of, and grief for, those who endured so much suffering during an Gorta Mór”.

CCIFV now has one more goal to achieve and that’s securing a fixed date for the National Famine Memorial Day, which fluctuates between May and September each year.

Michael said: “It’s vital that we have a fixed date, it will give stability to the commemoration, give it roots – and allow people to plan for and participate in the day.

“With local politicians Colm Brophy TD (Fine Gael) and Sean Crowe TD (Sinn Fein) continuing to keep the issue on the Dail’s agenda, I believe that we will get a fixed date.”