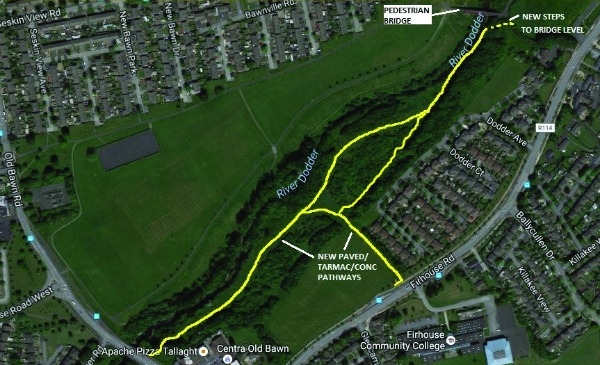 UPGRADES to pathways in Dodder Valley Park will not take place in the immediate future, despite concerns from a local councillor about their condition after an elderly resident tripped on a path in the area recently.

Sinn Fein councillor Enda Fanning submitted a question at the recent meeting of the Rathfarnham, Templeogue-Terenure area committee relating to the condition of the pathways, the pedestrian bridge and River Dodder.

It said: “The relevant section of parkland is within the boundaries of Old Bawn Road, Firhouse Road, the pedestrian bridge over the Dodder and the River Dodder itself.

“A stepped access to connect with the pathways at the upper level pedestrian bridge should also be included in any upgrade.

“The existing paths are in a poor condition and can be dangerous particularly in wet weather. The overgrown grass can also cause problems.”

Speaking to The Echo, cllr Fanning said: “After being contacted by an elderly local resident who had tripped on one of the paths I walked the land with him.

“The paths are overgrown in places by adjacent grass and bushes and therefore very slippy in places, with the danger more obvious as you near the River Dodder.

“There was a fallen tree partly across one pathway. Residents also walk up the bank to access the pedestrian bridge above and this is a disaster waiting to happen.”

In its response to cllr Fanning’s question, South Dublin County Council said: “The paths referred to here are in need of upgrading and surfacing as is suggested, however, due to the scale of the work required and the likely cost it is not possible to include it in either the normal maintenance programme or in the public realm improvement works programme.

“It is proposed that the necessary work will be costed and that the project will then be proposed for inclusion in the three-year rolling capital works programme.”

Cllr Fanning said that the council needs to “wake up” in situations where there is “immediate ongoing danger”.

He said: “I am very disappointed with the response from the council. The council has simply focused on cost with no regard for the safety of residents.

“A three year programme is far too long and the council needs to wake up to priority situations where there is immediate ongoing danger.

“As can be seen from the reply there is an acceptance for a need of upgrading and surfacing but no sense of urgency.
“Should there be future accidents in this area, what will the council say then?”