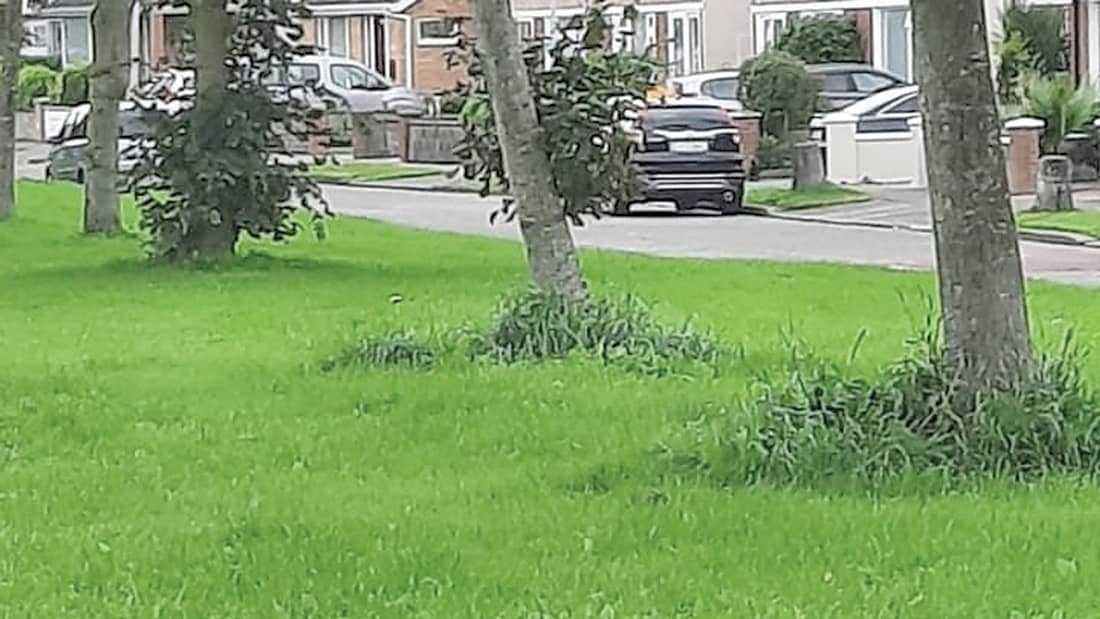 GRASS cutting works in the county were impacted by Covid-19 restrictions in March/April, while heavy rainfall in July/August exacerbated the situation at numerous locations, according to South Dublin County Council.

The Echo has received many complaints in recent weeks from residents regarding overgrown footpaths and green spaces in their community.

The overgrown grass at Hillcrest grass

A number of local councillors have also privately expressed their frustration at the inability to secure grass cutting jobs for constituents from overstretched council resources.

Residents have highlighted difficulty in trying to navigate footpaths on Newcastle Road in Lucan due to overgrowth and tree roots that have raised the footpath on New Nangor Road, nearly knocking a cyclist of his bike.

Lucan resident Liam Nichols, says the lack of grass cutting at a residential green space in Hillcrest has “gone to hell.”

“Kids can’t play on the green. During Covid, me and the neighbours went out and cut a square so the kids could play football,” he said.

“You can’t leave it for a month, especially with the rain we had, otherwise you need cows. Sometimes the council cut it twice a month and other times, not at all.”

The cut grass left lying in the green

Hillcrest green was subsequently cut by a contractor on Tuesday morning this week.

Mr Nichols says the problem on Hillcrest green has been going on for “five years” and questions why “the green around the corner from ours is pristine and cut every week.”

At Monday’s county council meeting, Cllr Shane Moynihan (FF) asked the Chief Executive whether or not there has been a “reduced frequency of grass cutting in the county”, and if there are plans to return to a “similar frequency as previous years.”

In response to Cllr Moynihan, South Dublin County Council said this year’s grass cutting programme was “affected in the early stages by the Covid 19 restrictions” and when brought back on track in Q2 the “slow down in grass growth that is normally experienced in Q3 did not materialise.”

“Grass continued to grow strongly in July and August due to a very high level of rainfall (rainfall in July was twice the average of the previous four years) combined with high temperatures, this has had the effect of slowing the grass cutting operation which in turn presents difficulties in meeting the target frequencies,” said the council.

Normally, the programme targets are weekly cuts for playing pitches and fortnightly for estate open spaces, roadside margins and parks but staffing has also been affected by the pandemic.

The council say the programme is usually bolstered by the recruitment of seasonal staff but it was not possible this year.

“These seasonal staff generally assist in cleaning of areas ahead of grass cutting as well as providing cover to operate machinery when regular staff are on annual leave.

The absence of these staff this year has had an impact on the grass cutting service and on the ability of the public realm section to keep machinery working when regular staff are out on leave,” said the council.

“All available staff and machinery have been assigned to the grass cutting programme and every effort is being made to achieve the target frequencies as in previous years.”

NEWER POSTModifications to be made to kissing gates
OLDER POSTLocal Faces: Claire Garvey