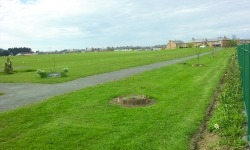 RESIDENTS fear plans for a housing development in Cherry Orchard Park will destroy a “marshland” that they have transformed into a source of community pride.
Cooperative housing body Nabco have received government funding for the pr

oject to construct 72 homes for social housing at Cherry Orchard Park.
Plans for the housing development were vehemently objected to by residents when Nabco initially applied for planning permission in 2007.
Despite planning permission being granted by Dublin City Council at the time, Nabco couldn’t proceed due to the downturn in the economy.
Locals took ownership of the park in 2013, after resident Eddie Fitzpatrick established a Stone Soup Project – planting flowerbeds and memorial trees, whilst granite was donated for a communal grotto.
The voluntary project has seen positive co-operation between young and old residents, transforming the site into a picturesque local amenity.
Residents that The Echo spoke to in Orchard Lawns this week, say they are not against housing but feel the area is lacking vital amenities, and a social housing development on their doorstep will create further anti-social problems.
Matt Kelly, a member of the Stone Soup Project, said: “Vandalism in the park has died down since the group started because there is nothing but respect for the work that is being carried out. Young lads often help out with the digging and planting.
“Communication rather than confrontation is key. Some councillors are jumping on the housing issue for votes, but they need to take into account the needs of the whole community. We hope the council relent – otherwise we’ll be looking at concrete.”
Nabco were granted an extension of duration to the planning application in 2013.
A Nabco spokesperson didn’t reply to The Echo at the time of going to print.
A Dublin City Council spokes-person confirmed that funding is in place for the development, and that Nabco will be tendering out for construction.
Sinn Féin councillor Daithí Doolan said residents have “genuine concerns” that must be addressed in a “face-to-face meeting with the council and Nabco.”
Cllr Doolan said: “I have tabled a motion for the Area Committee (to) ensure there will be a comprehensive, negotiated community gain resulting from building in Cherry Orchard.
“Cherry Orchard must see an overall improvement in quality of life. This is not about more houses with less services. Services must be an integral part of any housing plan. Communities should not be just about bricks and mortar, but about people who live in them. It is about planning and building homes with adequate services to meet the needs of a growing population.”
Residents are holding an open public meeting at Cherry Orchard Park today (Thursday, April 16) at 7pm.