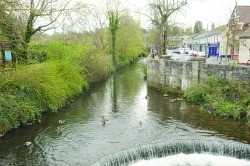 PLANS to build a footbridge in Lucan village are likely to be scrapped over fears it could present a flood risk.

The footbridge was set to be located over a “canalised section of river” between Griffeen Bridge and Vesey Bridge, included in a Part 8 proposal by South Dublin County Council.
This forms part of a €7 million investment by the council for a village initiative scheme countywide.
Plans for Lucan village include a major works upgrade at Main Street and at Lucan Bridge.
Fine Gael councillor William Lavelle, says flood risks surrounding the proposed footbridge were raised by local businesses, and the threat was further identified by officials from the Office of Public Works (OPW) and council architects, prior to the plans going on public display.
Lucan village suffered from flash floods in 2000 – which led to more than €5 million being invested in flood prevention measures, including the heightening of walls at the river.
Cllr Lavelle said: “I attended a consultation where I was advised by council architects conducting a flood risk assessment. Businesses were concerned primarily with making a gap in the bridge wall (to facilitate the footbridge). Opening up the gap would put them at risk.”
Whilst an initial supporter of the footbridge plan, Cllr Lavelle is happy to “leave it out” after a “scientific and evidence-based assessment” was conducted.
“The consultation process continues,” said Cllr Lavelle.
“I expect a formal recommendation to be forwarded at the Lucan area meeting first, and councillors will have the final say at the full council meeting.”
Works for Main Street, Lucan, include a new village plaza, raised pedestrian crossing, and alterations to paving, kerbing, car-parking, trees and public lighting.
Improved entrances are in the pipeline for Lucan Bridge and Watery Lane, along with new steps to the weir promenade.
Eddie Taaffe, Director of Land Use Planning and Transportation, South Dublin County Council, said: “The council is currently considering the proposed footbridge in Lucan as part of the village enhancement works. The council is reviewing the design of the bridge and will ensure that it will not impede the capacity of the Griffeen River nor will it detract from the existing flood defence walls in the area.
“However, given the issues raised, it may not be possible to construct the bridge as currently envisaged and an alternative means of access to the amenity area will then be examined.”
The plans and particulars can be viewed at www.sdcc.ie. Written submissions or observations may be made in writing no later than May 6.