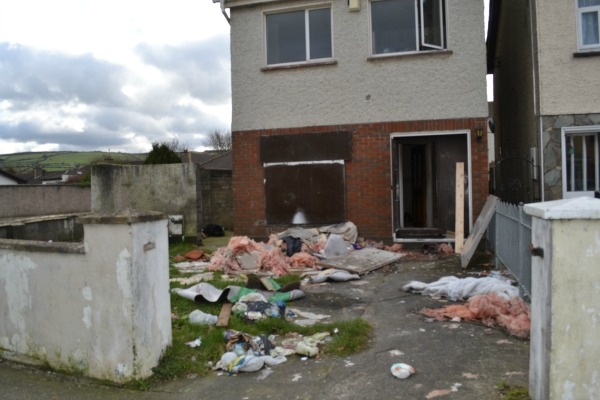 THE health and safety risks posed by abandoned properties in communities were fully realised this week when a young boy was pricked by a needle while playing in the front garden of a boarded-up home.

For the past two years, residents of Suncroft Park in Jobstown have been living beside an abandoned home – which has become a beacon for anti-social behaviour, drug use, illegal dumping and vermin.

The Echo understands that the house is currently going through receiver-ship, and that South Dublin County Council is having difficulty identify-ing the owner.

One resident living close to the house, told The Echo: “For the past two years we have been living with this health and safety hazard on our street and have made numerous calls to South Dublin County Council about it.

“In fairness, the council did come out last summer and clear away the rubbish, but it’s piled up again and is home to rats and mice – which are moving into neighbouring gardens.

“It’s no way to live and now we have a young boy who found a needle in the front garden, which jabbed him in the finger.

“What is it going to take for someone to take responsibility?

“We are constantly telling our kids to stay away from the house, but children wander and the only way we can keep them safe is to keep them indoors.”

On Monday, a number of residents contacted Sinn Féin TD Sean Crowe after a young boy told his family that he found a needle in the garden, which jabbed him.

The family wished not to talk with The Echo at this time, as they await test results.

Deputy Crowe told The Echo: “I received a number of calls from very distressed parents on Monday evening who were shocked over a young boy being exposed to a needle while he was playing in his estate.

“Hopefully everything will be okay for this child, but it’s a worrying waiting game for his family.”

He added: “South Dublin County Council is aware of the issue with this house and they have a responsibility, whether this is a private house or not, to make the community safe.

“The council needs to be able to take action and make communities safe, and there is an onus on them to carry out works and then bill the banks for what work they have done.

“This is not the only area with this problem, there’s a house in Rossfield Grove which is causing residents the same stresses.

“This is a growing issue and something needs to be done.

“Everybody is losing out here, we have a family losing their home and estates that are left to carry the burden of an empty house – it’s in everybody’s best interests that the house is occupied.

When contacted by The Echo, the council confirmed that the house was privately owned and was not its responsibility.

They also said that they have been unsuccessful in tracking down the owner.

“An inspection earlier today did not locate such presence.

“However, the accumulation of waste was noted by the council.

“It was cleaned by the council in the past and has also been the subject of council attention under our Derelict Sites remit.”