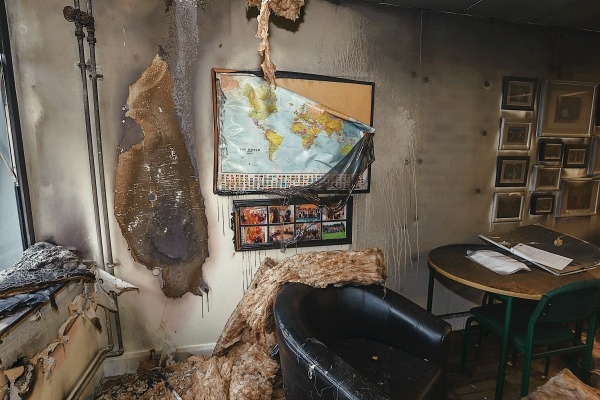 MORE than 500 Tallaght children are currently out of school after a lone arsonist maliciously set fire to St Mark’s SNS in Springfield, causing collateral smoke damage to all classrooms.

In the early hours of Saturday morning, a fire was deliberately lit in an access point to the school – which, igniting within the building, destroyed the principal’s office, causing serious smoke damage and contaminating all 28 classrooms.

The school has been assessed and deemed unsafe for children due to the level of smoke damage, with an industrial cleaner currently on site.

Closed since Monday, the progressive school’s 525 pupils are expected to be out until at least March 4 when the condition of the school will be reviewed.

Speaking to The Echo after a Board meeting on Wednesday, Principal Richie Walsh said: “We’re at a complete loss as to why this happened.

“I’ve been with the school 19 years and nothing remotely like this has ever happened, and I can’t see this maverick being somebody from the Springfield community.”

He added: “Even though the fire was just in the Principal’s office, every room in the school has been contaminated and the building is not safe until it has been cleaned properly.

“This fire has had a huge impact on the school community, kids are out of school, teachers can’t do their work and parents are in a state of shock.

“However, we will come back from this.

“We always try to instil resilience in the pupils and we will be resilient now and build back our five-star school.

“We’ve been blown away with the support from the community, residents’ associations, the parents, school suppliers, so many people have reached out in support . . . and while everybody is very upset and angry over what happened, the community will pull together and come back from this.”

Gardaí at Tallaght are currently investigating the malicious blaze, with The Echo understanding that a lone male was captured on CCTV at the time of the fire.

A senior Garda source confirmed that the fire was “malicious” and that it wasn’t accidental or electrical.

“If anybody has any information on the fire I would encouraged them to contact Tallaght Garda Station, we all need to watch out for our local schools and report any suspicious activity.”

Anyone with information on the fire which happened between midnight and 1.00am on Saturday, February 20, contact Tallaght Garda Station on 6666000.