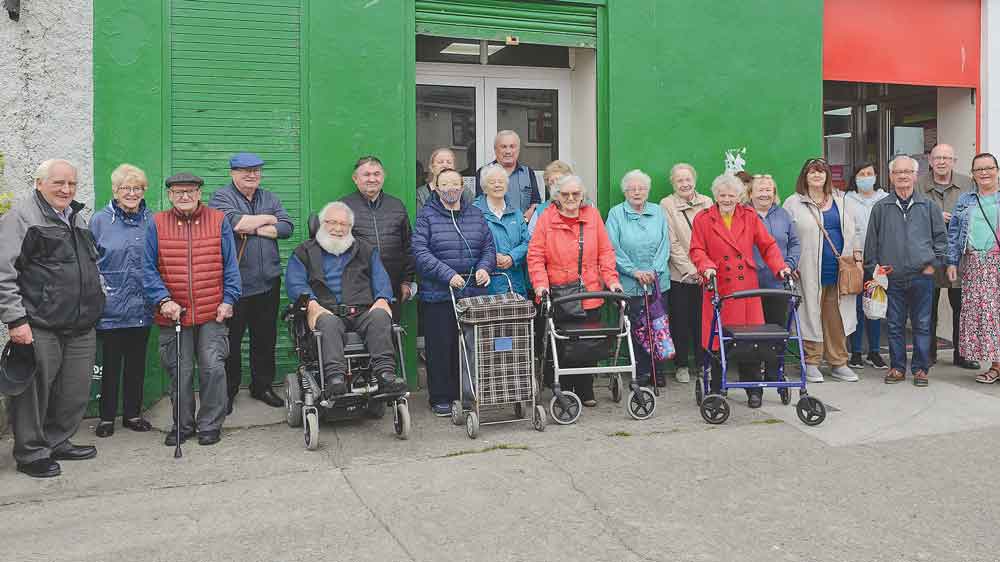 Some of the residents who are concerned about the frequency of the new routes and the impact it will have on their lives when they go shopping, attend medical appointments or simply get out and about

THE next phase of BusConnects will see changes to routes in Dublin, including that of the 79/79A and 40 routes in Ballyfermot.

Residents who discovered the route would be coming to an end in August via bus drivers last week, have expressed major concerns that the new changes, will “decimate” bus services for Ballyfermot residents.

On August 28, Phase 4 of the Bus Connects plan will see further bus routes replaced with “Spines”, and radial routes which run with high frequency into the city centre.

Residents that The Echo spoke to say the lesser frequency of new routes, and the likelihood of buses full already when they arrive in Ballyfermot, are a major concern, particularly for elderly and vulnerable commuters.

Ballyfermot resident Robert Fitzpatrick, first heard the news from a bus driver last week, and started his own information campaign, which was subsequently supported by local politicians.

Mr Fitzpatrick carried out his own research on the proposed changes, and while he thinks the new routes will provide a good service, he believes the biggest impact will be on rush hour commuters in Ballyfermot.

“The new G-Spine will see an increase in the total number of buses operating between the Civic Offices in Ballyfermot and Spencer Dock via the existing number 40 route. At the same time, the residents of lower Ballyfermot living between Kylemore Road and Lally Road will see a decimation in service,” said Robert.

From August 28, between the hours of 6am-10am, five number 60 buses serving lower Ballyfermot will leave the Red Cow Luas stop.

“These five buses will almost certainly be fully occupied before reaching Kylemore Road and the people who use 79/79A will be forced to use the G1/G2, increasing their travel time significantly.”

Researching the PDF maps for the new routes on the Bus Connects website “can become confusing at points” according to Fitzpatrick, who found it does not contain all street names and it is “necessary to cross-reference with a proper map.”

“The really important point to understand is that commuters in the areas currently served by the number 40 will not see any loss of bus service, as the G2 is essentially just a rebranded number 40.

“Between the Red Cow Luas stop and Grange Cross, the G1 is really just an extended 79/79A.”

Mr Fitzpatrick said it is at the Church of the Assumption Church in Ballyfermot where residents will really start to see a difference.

“Clearly the reduction in the number of buses serving Decies Road will negatively impact quality of service currently experienced by the people who use the 79/79A between Kylemore Road and Lally Road,” he said.

“Lower Ballyfermot has a considerable number of elderly residents and many of these people depend heavily on the 79 bus service.

“Of course, if they are fit and mobile enough, they can walk up to a quarter of a mile to get a G1/G2 on Sarsfield Road.

“In the post-pandemic world we should be doing everything possible to ensure that older and more vulnerable people are encouraged to get out and about and not isolating them by throwing obstacles in their path.

“The real losers will be the residents of lower Ballyfermot who depend on the 79 bus to go to work, go shopping, attend medical appointments or simply get out and about.”

“Route 79 will be impacted by the implementation of G Spine.

“However, the G Spine, which will operate from Ballyfermot to Docklands via the city centre, will provide an enhanced frequency of service.

“Route 60 will also operate from the Red Cow to Spencer Dock via Cherry Orchard and Decies Road.

“The National Transport Authority is the agency with statutory responsibility for this project and as such would be best placed to answer any further queries.”