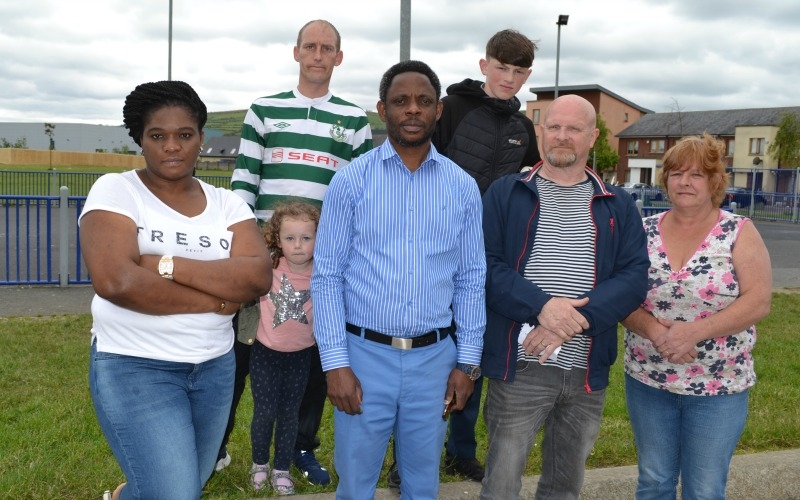 Residents unite in taking a stand against racism

THE residents of Mac Uilliam are taking a stand against racism and rebuilding their community through the creation of a residents’ association, after the playground was last week defaced with vile racist graffiti.

Gardai and South Dublin County Council are investigating the incident which saw the playspace in Mac Uilliam defaced with racist graffiti, which appeared overnight on Wednesday, May 18.

Members of the community were faced with the graffiti when they woke up on Thursday morning. It was seen by both children and adults as they made their way to school and work.

Since then the graffiti, which has been attributed to an extremely small minority, has been condemned right across the community.

In response to the graffiti, residents gathered on Saturday to say ‘no to racism’, a move which, supported by local Solidarity and People Before Profit (PBP) politicians, was attended by residents of all ages.

Speaking after attending the meeting, Solidarity TD Paul Murphy said: “Saturday’s event was an important community response to the disgusting racist graffiti which doesn’t reflect the views of the residents of Mac Uilliam.

“By bringing people together, it can be the start of a united movement to demand investment and action to end the neglect of their area by the authorities.”

Resident Samson Akinsanya spoke with The Echo this week and said that the estate is “not living in harmony” and that residents need the support of local politicians and South Dublin County Council to help bring the community together.

He said: “I was not happy for my children when they heard about the graffiti, they were frightened and afraid . . . even though this was the action of a very small number of people.

“The residents hope to create a committee or a residents’ association, get better organised . . . and we think that South Dublin County Council should come and talk with us.

“The council needs to work with the residents and help everyone to live as one.”

According to Tallaght South Solidarity councillor Brian Leech, who is working to secure a deputation meeting with the council for residents of Mac Uilliam: “It was agreed by all present [on Saturday] to organise a follow-up meeting in the coming weeks to begin to deal with the issues faced by residents in the estate.

“There are real challenges in our estates involving anti-social behaviour, policing and access to resources and facilities.

“We think the best response to that kind of racist graffiti is to unite the community around these common struggles – to engage, organise, and fight collectively on behalf of the whole community.”

When contacted this week, South Dublin County Council, which removed the graffiti, said: “The council was made aware of this incident and is dealing with it as, are the Gardaí, [and it is] currently under investigation.

“The council’s community department are available and happy to work with local residents in setting up a new residents’ committee.”