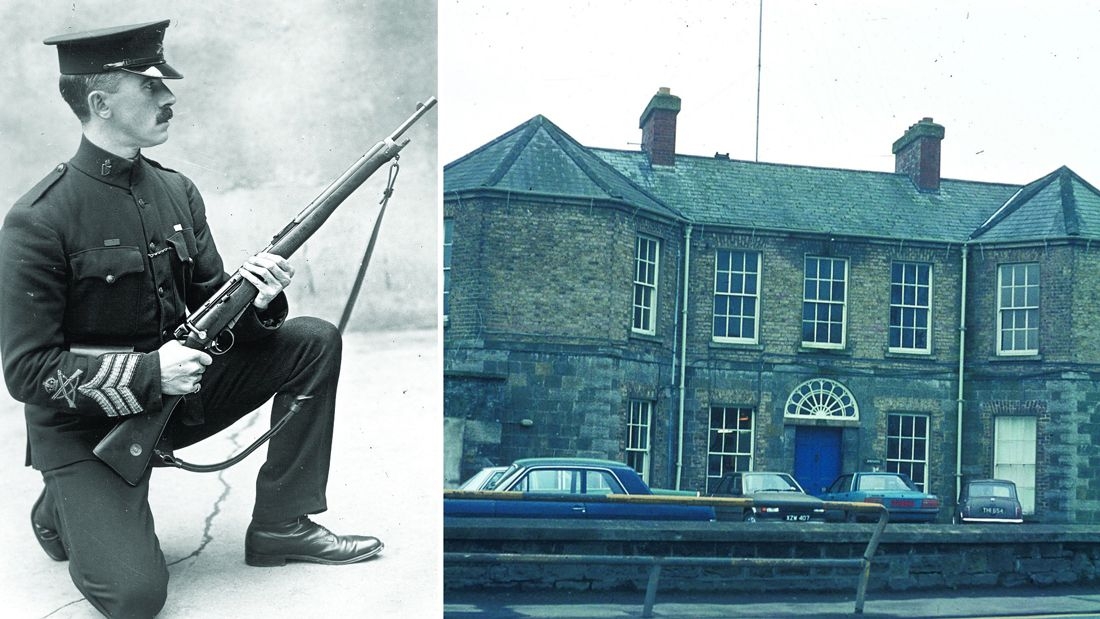 From ambushes to arson attacks, the history of the Royal Irish Constabulary (RIC) during the Irish revolutionary period is full of conflict and contention.

The police force which operated in Ireland between 1836 and 1922 played a central role in Britain maintaining control and rule on the island of Ireland up until the end of the revolutionary period.

In South Dublin there were several RIC barracks in locations such as Clondalkin, Chapelizod, Crumlin, Lucan, Rathcoole, Rathfarnham and Tallaght.

During the revolutionary period, the RIC in South Dublin were no strangers to the campaign that was being led by the Irish Republican Army (IRA) against British forces across the country.

The IRA had an agenda which included the targeting of RIC barracks, whether occupied or vacant. Both the success of IRA attacks on the RIC and the significant number of resignations from the force during the War of independence led to a number of police barracks lying idle around the country.

In South Dublin there were many instances during the War of Independence whereby RIC barracks were targeted by republicans, however, not all planned attacks were a success.

As reported by the Evening Echo on 5 July, 1921, the RIC barracks in Lucan had been attacked “by a number of armed rebels”.

The paper reported that the police returned gun-fire, successfully driving the rebels away.

On this occasion there were no police casualties, however, this would not have always been the case.

According to a report in the Freeman’s Journal, a man named David Campbell was awarded £100 compensation over the attack on the Crumlin barracks.

Campbell was the caretaker of the building at the time and had been compensated for furniture and clothing that had been destroyed during the attack which took place on May 12, 1920.

Furthermore, David Campbell recalled how he was forced to spend the night in the post office and his invalid wife had to be carried out of the barracks and placed on the roadside, later to be hospitalised as a result of the experience.

Although there were no reports of police casualties, the attack on the Crumlin barracks is a case which illustrates how violence directed at RIC members and barracks often had consequences for unintended victims.

A more mysterious attack was alleged to have happened on the barracks located in Chapelizod, with disagreements arising as to whether an attack even happened at all.

On August 9, 1920, it was reported in the Freeman’s Journal that there was an attack on a military patrol by an estimated 40 civilians in the area of the vacated police barracks two days previously.

It was further reported by the publication that the military patrol returned fire at the civilians who fled, leaving behind a crowbar, tins of petrol, hay and rags – suggesting that there had been a plan to launch an arson attack on the vacated barracks.

However, later in the day, the Evening Herald had their take on the alleged incident, claiming that it was false altogether, stating that locals disputed any serious incident ever happening just two nights before.

According to the paper, locals denied such events, claiming that there was nobody in the area of the vacated barrack at the time and no attempt was made to burn down the building.

Although, residents asserted that ‘the soldiers got nervous and fired at imaginary objects’, with several shots being fired at a fountain in the belief it was a man.

The event was  labelled by media as the ‘Chapelizod Mystery’, but whether there was an attempt made to set fire to the vacated barracks or whether the soldiers became excitable at the sight of a fountain is still up for debate.