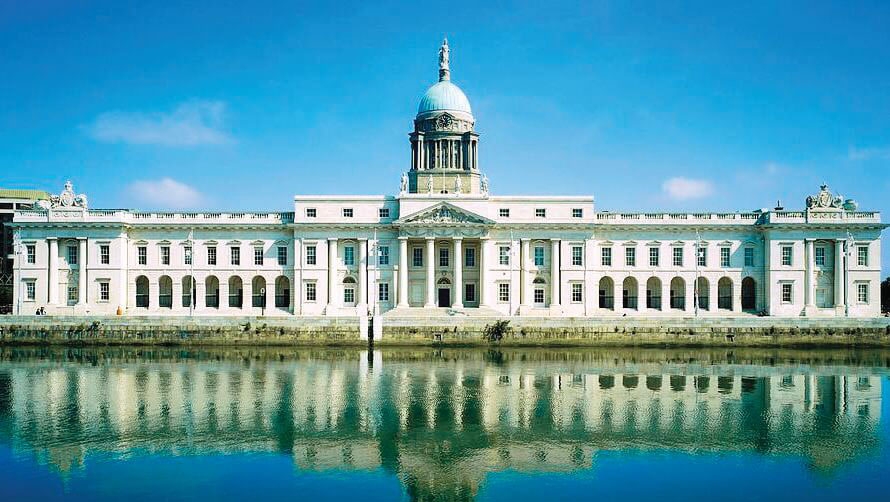 Last week I focussed on the Irish House of Commons building on College Green.

One of the architects involved in that project was a man who many would consider a ‘celebrity architect’, and a person many would regard as one of the most famous people in Irish history, James Gandon.

So for today’s column I am exiting the now Bank of Ireland building and turning onto Westmoreland Street, crossing O’ Connell Bridge, turning right onto Eden Quay and crossing Beresford Place.

Our walk stops here outside this week’s object of historical interest – The Customs House.

Situated on the Quay that bears the name of it’s illustrious dwelling that straddles it, it is now home to the headquarters of the Department of the Environment, a Department Dublin Bay North TD Richard Bruton is Government Minister of.

In 1781, James Gandon was asked over from England to oversee the design of a new and improved Customs House for what was then the second largest City in the empire.

William ‘ The Speaker’ Connolly, who featured in a recent article of this series, oversaw the construction of the original which was built on Wellington Quay, which is now the Clarence Hotel, at the far side of Temple Bar, and it operated as Dublin’s Custom House for 84 years, before the bigger and bolder replacement opened it’s doors in 1791.

Gandon was born in London in 1742, if you recall I explained in a previous article that Gandon’s name is neither Irish or English – his Grandfather was a Hugenot refugee who fled France after it’s Catholic rulers increased attacks on members of the Protestant faith.

The building cost a princely £200,000 (Over €16M in today’s money to construct), and took ten years from turning of the first sod to it officially opening it’s doors.

At his time the population of the island of Ireland stood at a neat 5 Million, of which 200,000 lived in Dublin City.

It was a very divided country with the Penal laws still in place (they would not be repealed for another 39 years), and those of the majority Catholic faith were still trapped in extreme poverty as a result.

There was still a functioning parliament building 20-minutes walk away, but it would cease to exist as such ten years later, following the signing of “the Act of Union”.

Built on reclaimed land, The Custom House development has four differing sides that are linked by facades at every corner.

The main entrance to the south that faces the River Liffey, is supported by four columns below the narrow dome that sits proudly atop the roof surrounded by a number of statues.

They were designed by sculptor Edward Smyth.

While he was born in Co Meath in 1749, the family moved to Dublin a year later, when his father, a stone-cutter found employment in the Irish Capital.

Smyth was to learn his trade at Batchelors Walk in the premises of the sculptor Simon Vierpyl.

One of his first notable creations was the model of the M.P. Charles Lucas, which can now be seen on it’s pedestal in City Hall on Dame Street.

This creation sent tongues wagging around Dublin as it was deemed such a fine piece of work.

Spurred on by word of mouth recommendations, James Gandon arranged a meeting with Smyth where he gave the sculptor drawings upon which he was to create mini replicas.

When the London-architect was shown the models, he was more than impressed, and readily gave Smyth the job of creating the full size statues to go on the roof of the Custom House.

The main pediment above the front door features a sculpted visual entitled ‘Friendly Union of Great Britain and Ireland with Neptune driving away Famine and Despair’.

The four statues on the North Façade looking out on Beresford Place represented four of the worlds continents, and are known as; ‘Europe’, with a helmet and sword, ‘Asia’ in a dress with a hat on it’s head that resembled those worn by a Dervish, ‘Africa’ a half nude woman wearing tribal headwear and ‘America’ who resembled a Native American woman.

The original building was destroyed by fire during the Irish Civil War, and sadly many important historical documents that referenced the people and places in Dublin City and elsewhere on our island were lost for good.

Restoration work saw the building being reopened in 1928, whereupon it had changed from a Custom’s overseer to a branch of the Government of Ireland.

In 1980 it was decided to once again give it a major makeover, which was completed in time for the 200 year centenary in 1991.

With guided tours of the building (on selected dates), why not take a visit yourself?