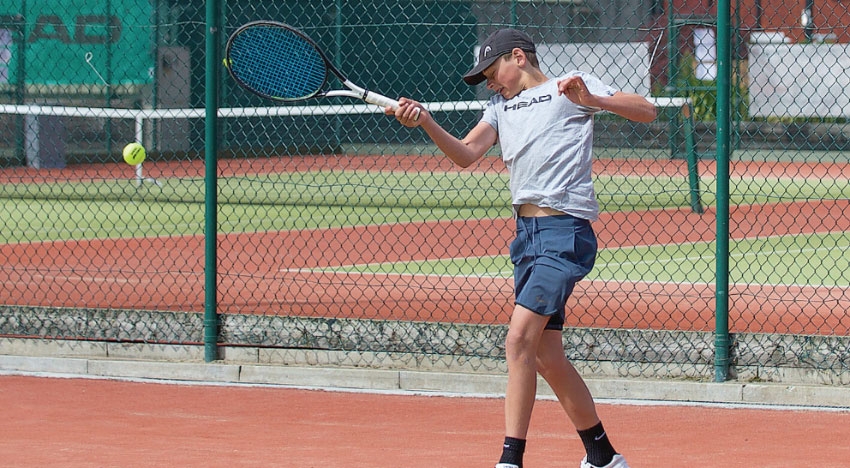 Rising tennis star from France to play for Ireland and Templeogue

TEMPLEOGUE Tennis Club looks set to become home to one of France and Ireland’s most promising young competitors.

Thirteen-year-old, Alexandre Vrel-Nagel, who currently trains and plays in Bordeaux, is in the process of declaring for Ireland with the intention of eventually qualifying for the Irish Davis Cup team.

Vrel-Nagel’s mother, Karen was born in Dublin and raised in Enniskerry, Co Wicklow before moving to study at the University of Nice.

She later married and her son Alexandre visited Ireland for the first time last month to compete in the hugely competitive National Junior Open in Templeogue and there he really caught the attention of Tennis Ireland.

Being his first Irish tournament, he had no Irish ranking and was, therefore, seeded last in the qualification rounds.

Despite being placed at the very bottom of the draw in the Under 14 Boys division, he made his way through the qualification rounds and into the main draw.

He then turned more heads when he beat the Number One seed, Johnny Wilkinson from Carrickmines in the first round, making it all the way to the final where he was eventually undone by the Number Two seed Sean O’Nuallain as he struggled to play in the tail end of Storm Hannah.

In all, the young clay court specialist won 11 matches en route to the decider, quickly adapting and flourishing on a surface that was pretty much alien to him and in weather conditions in which he never competed before.

“It was unfortunate as I had learned to transition from my usual defensive clay court game to the much more dynamic omni courts, but the weather got the better of me on the day” said Vrel-Nagel.

“However, I was really happy with my eight days here in Ireland and specifically at the Templeogue Tennis Club”.

“They made me feel extremely welcomed and did everything to make me feel at home. It was a great experience, and I thank them for their hospitality, generosity and encouragement. I would love to make it my home club if they will have me” he added.

Certainly Tennis Ireland have indicated that they are very much open to the prospect of bringing Vrel-Nagel on board to represent Ireland with CEO Richard Fahey saying  “Tennis Ireland is delighted to see Alexandre return home to his family’s ancestral roots as he looks to develop his tennis career.

“There is a huge Irish diaspora abroad and we are always really keen to welcome home any Irish player who has the desire and drive to represent Ireland.

“We look forward to following his development in Templeogue LTC and through the Tennis Ireland structures” he added.

Securing the services of Vrel-Nagel would be a major coup for Templeogue TC and Irish tennis with the young player having won a number of top regional tournaments in France over the past several months.

Taking up tennis at the age of seven, he has been training some 3-5 hours every day for the past three years while being home-schooled.

Accompanying him to Ireland to contest the Junior Open last month was his grandfather Eric who was impressed with the performance of the Davis Cup hopeful.

“It was his first time to compete in Ireland and he’s a clay court specialist. That’s a very defensive type of tennis” he explained.

“Here, he had to compete on an all-weather grass surface. It’s a faster, more aggressive game with not as many rallies, so you have to win points quickly.

“He’s had to play in wind and rain. In France they don’t do that. If it rains, they come off the court, but he played in a rain storm in the quarter finals and won that.

“He was really unlucky in the final on Saturday as neither player was able to play a normal game of tennis. Storm Hannah’s wind was far too strong and the rain was simply an extra element to ruin the game.

“In France he’d be in the top 15 or 20, but he’s half Irish and he wants to represent Ireland at European and international tournaments.

“He’s a full-time elite player. He plays three to four hours every day.

“Tennis Ireland took a look at him and they saw he did extremely well. He beat the Number One see in the country so he’s demonstrated that he’s at a very high level” he said.