Ronan Finn with The President's Cup

Rovers edged out Saints on penalties in President’s Cup

New Pat’s signing Eoin Doyle and Rovers skipper Ronan Finn had traded goals during the second half of the game and with their top-flight campaigns getting underway next weekend, both teams will have viewed this tie as a worthwhile exercise.

There was very little to separate the two teams whenever they came up against each other last season, with both sides sharing the spoils on the opening weekend of the Premier Division in Tallaght just under 12 months ago.

Eoin Doyle was not only making his return to domestic football after a memorable stint in the UK, but also to one of his former stomping grounds. 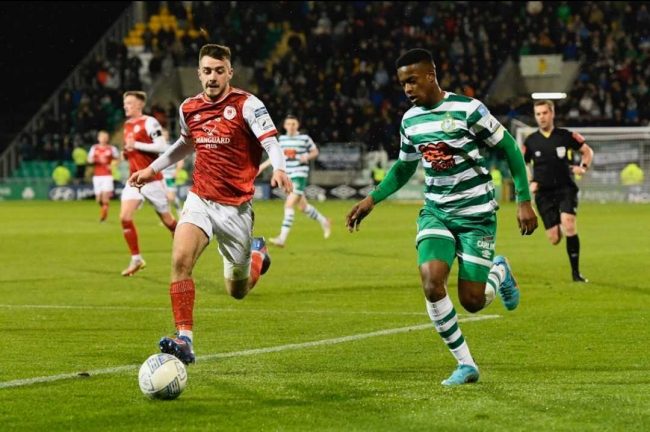 The Firhouse native was a Shamrock Rovers player at the beginning of his career before subsequently securing back-to-back FAI Cup titles with Sligo Rovers.

He had the only shot on target in what was a tentative opening quarter of action.

Rovers had plenty of possession throughout the opening period, but Tim Clancy’s Saints made life difficult for their opponents and the deadlock remained unbroken at the break.

It looked like a goal was needed to spark the game into life and it duly arrived five minutes after the restart.

After Hoops netminder Alan Mannus couldn’t hold onto an awkward effort from just outside the area, Eoin Doyle was on hand to tap in the rebound.

Now in the driving seat, Pat’s had their sights set on a morale-boosting win. Rovers came from behind to win a number of games in 2021, however, and with Finn and Danny Mandroiu both going close a big push was anticipated from the hosts.

On the third-quarter mark, the Hoops finally got themselves back on level terms when Finn capitalised on excellent play from Neil Farrugia to fire home.

Mannus produced a fine stop from Chris Forrester with 10 minutes remaining on the clock, but the former Northern Ireland international was called upon once again when the sides remained inseparable at the end of normal time.

Although Pat’s triumphed on penalties in last November’s FAI Cup final, it wasn’t to be for them on this occasion.

While Eoin Doyle, Mark Doyle, Tunde Owolabi and Adam O’Reilly all scored from the spot, Forrester couldn’t angle his effort beyond the reach of Mannus.

Rovers on the other hand had a perfect sequence of penalties with Richie Towell, Graham Burke, Sean Hoare, Gary O’Neill and Byrne all rattling the net.